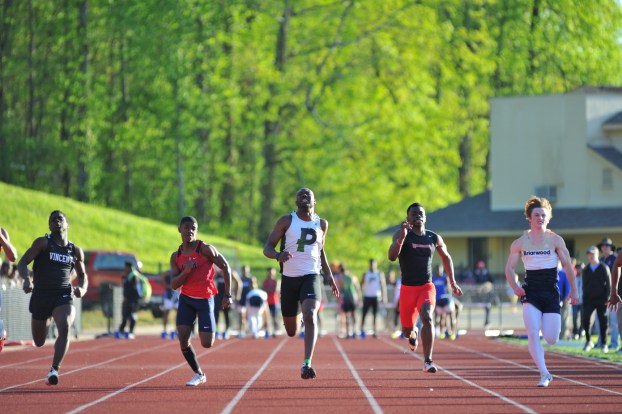 Pelham's boys and girls both continued their strong outdoor track and field season at the Shelby County Championship. (For the Reporter/Larry Dancy)

NORTH SHELBY – Shelby County’s class 6A track and field teams continue to be some of the best as both Helena and Pelham have strong chances to compete for state titles individually and as a team, and Chelsea’s Teanna Cason has been competing amongst the best runners.

Below is a recap from the Shelby County Championship track and field event that took place at Briarwood Christian School on Monday, April 16.

The girls have a strong chance at a title in Class 6A and proved why in this event with 13 top-three finishes in 18 varsity events, including five first-place finishes.

Katie Strozier was one of the major highlights for the Panthers with two first-place finishes. Strozier finished atop the podium in both the 400-meter dash and the 800-meter run.

In the 800-meter run, she finished two spots ahead of Alex Wilkins in third place. Wilkins also went on to finish second in the 1,600-meter race to give her two top-three finishes.

Erin Long also continued her stellar season with four top-three finishes. Long finished first in the javelin throw and the 100-meter hurdles, while finishing in second in the triple jump and third in the long jump.

Sara Guthrie also added a first-place finish, as she stood atop the podium at the conclusion of the pole vault event. Guthrie went on to finish in second in the long jump as well for two top-three finishes.

Ayala Seaborn picked up a third-place finish in the discus throw to add another strong finisher.

The final top-three individual finisher for Pelham was Emorie Long who finished just behind her sister in second in the javelin throw.

As a team, the Panthers were able to pick up top-three finishes in the 4X800-meter relay and the 4X400-meter relay finishing second and third, respectively.

Donovan Ross was the boys’ biggest highlight thanks to two first-place finishes. He finished atop the standings in both the 100-meter dash and the 200-meter dash.

Adam Keller and Dorian Tolbert were responsible for the Panthers’ other two top-three finishes in the event. Keller finished third in the 1,600-meter run, while Tolbert finished second in the discus throw.

Helena’s boys and girls also had a strong showing and are building off a successful season, as the boys finished second overall and the girls finished fourth overall in the team standings.

Blake Vaughn was one of the boys team’s strongest runners with his finishes of second in the 1,600-meter run and third in the 3,200-meter run.

In the 110-meter race, he finished one spot ahead of teammate Christian Hill in second.

Justin Stuckey became another athlete to finish in the top-three in multiple events as he took first in the long jump and second in the high jump.

In the high jump event, Stuckey was just ahead of teammate Jonah Hyde in third. Hyde also finished third in the triple jump behind Wallace.

Allison Tanner and Kirsen Gardner were the biggest highlights for the girls. Tanner finished first in the high jump, while Gardner finished second in the discus throw and third in the shot put.

As a team, the Huskies finished third in the 4X800-meter relay.

Teanna Cason was Chelsea’s biggest highlight thanks to her two top-three finishes for the Hornets.

Helena tops Chelsea by one run in tiebreaker for area championship

By ALEC ETHEREDGE | Sports Editor  HELENA – With both teams sitting at 3-1 in area play after sweeping Pelham... read more