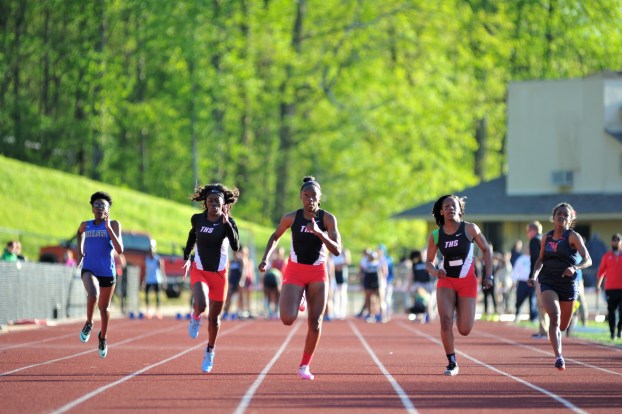 Thompson's track and field team dominated the Shelby County Championship by finishing first in both the boys and girls team standings. (For the Reporter/Larry Dancy)

NORTH SHELBY – During the last regular-season week of track and field competition before the postseason begins, Thompson and Oak Mountain were two of the 10 county teams to compete at the Shelby County Championship on Monday, April 16.

It was an event dominated by the Warriors, but also saw unbelievable performances from the Eagles as well. A full recap is below.

Thompson’s day was dominant to say the least and it consistently featured athletes inside the top three of each event.

Zakira Holifield and Alandria McCurdy finished on the top two spots of the podium in the 100-meter dash, with Holifield taking first.

The two weren’t done in that race and went on to take the same order in the 200-meter dash as well.

McKenzie Hogue continued to torch through the competition at the event and had three top-two finishes, including finishing atop the podium twice. She finished in first in the 1,600-meter race and the 3,200-meter race, while finishing one spot out of three first-place finishes in the 800-meter run.

In the 100-meter hurdles, Thompson continued its dominance in the girls’ events by placing two athletes in the top three for the third time.

The Warriors also finished in the top three in two of the three relay races taking first in the 4X100-meter relay and second in the 4X400-meter relay, before finishing fifth in the 4X800-meter relay.

In the women’s high jump, London Wooley narrowly added another top-three finish for the Warriors thanks to her tie with Oak Mountain’s Emma Farmer.

In the next five events, Thompson was able to pick up four first-place finishes to continue its dominating team performance.

Alaya King and Butler also added two other top-three finishes in those events with King finishing third in the triple jump and Butler finishing second in the shot put.

That gave Thompson a total of 20 top-three finishes in just the 18 varsity girls events.

Sam Holmes finished first in the 400-meter race and second in the 200-meter run to put the boys right on par with the girls. In the 400-meter event, he finished just ahead of teammate Van Smitherman in third and Alondae Vassar in fourth.

Thompson then went on to sweep the podium in the 800-meter run as Thomas Cousins finished first, Timothy Osborne finished second and Jace Jones finished in third.

Jones followed that third-place performance with a first-place finish in the 1,600-meter run to give Thompson seven top-three finishes and three champions in just five events.

In the two hurdle events, Osborne and Cameron Childs both had strong showings. In the 110-meter hurdles, Childs finished in third, while Osborne was able to finish first in the 300-meter hurdles.

Thompson then went on to win two of the three relay races finishing in first in the 4X400-meter relay and the 4X800-meter relay.

The dominant effort led to the Warriors finishing atop both the boys and girls team standings at the end of the event.

Erica Miller and Ashlyn Boyd both finished in the top three in the 300-meter hurdles. Miller finished second, just 0.36 seconds behind Calera’s Syncere Henderson, while Boyd was only 0.13 seconds behind Miller in third.

Some of the Eagles’ strongest performances of the championships came in the relay races where they finished inside the top two of all three.

In the women’s high jump, Farmer tied with Wooley of Thompson with a height of 4 feet 10 inches gaining 5.5 total points for each athlete.

Phoebe Cooper was the final Oak Mountain girls’ athlete to pick up a top-three finish, as she took third in the javelin throw.

Notably, the Eagles didn’t run Nicole Payne in any of the short-distance runs in which she is the favorite to win a state championship.

The girls were still able to finish in third in the team standings after a solid effort. They were just behind two state-championship level teams in Pelham and Thompson.

For Oak Mountain’s boys, Trey Allen was the biggest highlight as the team’s only first-place finisher in the high jump.