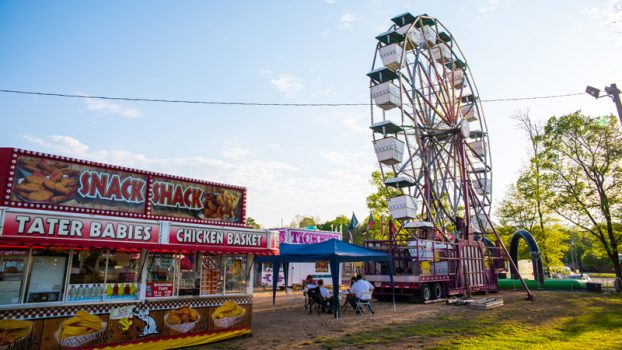 The Columbiana Carnival officially opened in the lot across from the Shelby County Courthouse on Tuesday, April 17. (File)

COLUMBIANA – The Columbiana Kiwanis Club’s second consecutive carnival officially opened to the public at 5 p.m. on Tuesday, April 17. The carnival is held on the lot between Walton and Mill Streets, across the Shelby County Courthouse, and will be open between 5 and 10 p.m. until Thursday, April 19, and between 5 and 11 p.m. until Saturday, April 21.

President Sid Wheeler said the carnival serves as a secondary event to the Kiwanis Club’s main fundraiser, the Shelby County Fair, which is held each fall. The proceeds from both events benefit nonprofit organizations that serve children throughout the county.

“It’s a backup for the Shelby County Fair. We’ve donated so much to programs for kids (through the fair), that they’ve come to depend on us,” Wheeler said. “If we have just one event a year and the weather turns really bad, we’ll end up with nothing.”

Wheeler said the carnival features rides, games and fair foods, but does not feature exhibits and livestock or produce competitions like a traditional fair would.

Wheeler said the Kiwanis Club contracted with James Gang Amusements of Andalusia for the second year.

According to Wheeler, the weather is expected to be fair throughout the week. Wheeler said the Kiwanis Club is looking forward to having locals come out and enjoy themselves.

“We’re all optimistic about it,” Wheeler said. “The weather forecast is good. Maybe we’ll get it right this time.”

Armbands will cost $15 until April 19, and $18 from then until April 21, and are good for unlimited rides. Tickets for individual rides will also be sold.