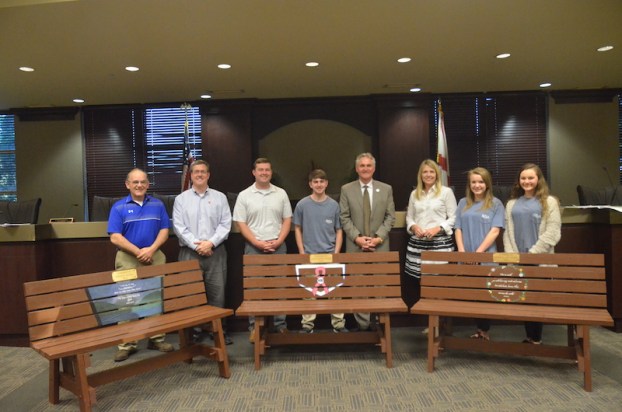 The ChHS SGA displays the benches they had built with the help of local volunteers in memory of ChHS parents Thomas Smith, Kristi Barker Ingram and Jennifer Lowe Berry. (Reporter photo/Amalia Kortright)

CHELSEA – Members of the Chelsea High School Student Government Association presented a recently completed project to the Chelsea City Council during a regularly scheduled meeting on the evening of Tuesday, April 17.

According to President Tanner Middleton, members of the SGA, along with other members of the community, worked together to build and decorate three benches to memorialize the parents of several ChHS students who died. Those honored were Thomas Smith, Kristi Barker Ingram and Jennifer Lowe Berry.

“It was something we knew we could do to help out the community, as well as honor some students in our grade that really play an influential part in what makes up our grade. They are really talented people in a lot of ways,” Middleton said.

“We are really thankful to get to work with the city and get so many people involved,” Middleton said.

The benches were originally planned to be placed in a city park, but Picklesimer said the benches were given to the families to decide where they are displayed.

Picklesimer commended the ChHS SGA and others in for their service.

“Community volunteerism and that spirit that goes with that is irreplaceable. It just shows what the fabric of a community is made of,” Picklesimer said.

–The city’s bills were paid.