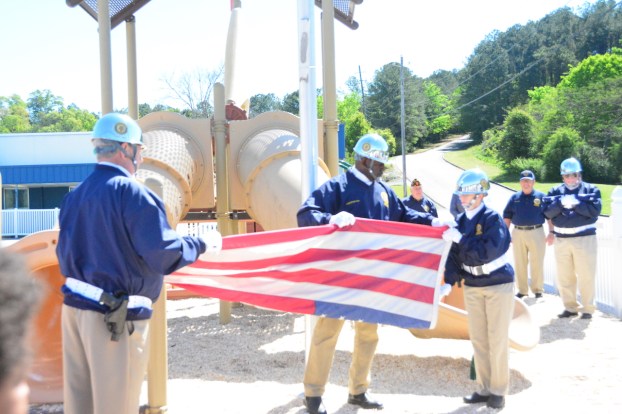 Members of Post 555's Honor Guard take down the old flag at School for Amazing Kids. They replaced it with a new American made flag. (Reporter photo/Briana Harris)

PELHAM – Dozens of students gathered around the flagpole at School for Amazing Kids to watch the Matthew Blount American Legion Post 555 retire a torn and tattered flag on Tuesday, April 17.

The event was used as a way to educate the children about the importance of the U.S. flag. This is the second time Post 55 has replaced a flag at the school.

As the old flag was lowered, the “Retreat” bugle call played, Paschal said. He said “Retreat” used to be played to signal the end of the official duty day.

It has grown to become the bugle call, which is a short song, played when lowering a flag.

Historically, bugle calls eliminated confusion on the battlefield. Each bugle call was a signal of what action to take.

At the end of the ceremony, Post 555 gave miniature American flags to the students to wave as they recited the Pledge of Allegiance.

When a school or business contacts Post 555 to conduct a Flag Replacement Ceremony the post will provide the organization with the appropriate sized American made flag. Post 555 does request that a donation be made to the post to cover the cost of the selected flag provided by the post. However, a donation to the post for the Flag Replacement Program by anyone would be greatly appreciated.

For more information about the American Legion Flag Reward Program, go to ALPOST555.com.