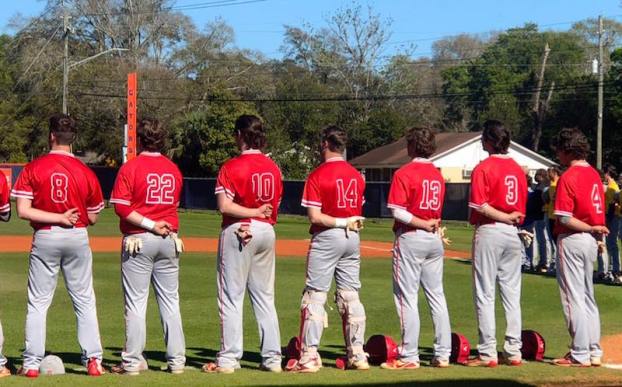 Coosa Valley Academy swept a doubleheader with Emmanuel Christian on Friday, April 20, to advance to the quarterfinals of the playoffs. (Contributed)

HARPERSVILLE – Coosa Valley is headed to the AISA Class AA quarterfinals after sweeping Emmanuel Christian in the first round of the playoffs on Friday, April 20.

The Rebels didn’t give up a run in either of the two games as pitching was strong the entire afternoon, while the offense scored a combined 20 runs between the two games. A recap from each win is below.

Coosa Valley made its presence known in the opening inning of game one as the Rebels scored four runs in the first inning en route to an easy 8-0 shutout to start the first-round series 1-0.

A walk and an error allowed Jacob Walton and Mason Houston to reach base to start the bottom of the first. Two more errors followed, which allowed both to then cross the plate for the first two runs of the game.

That was followed by a ground out RBI from Josh Baker and a sacrifice fly from Sammie Shepherd that allowed Kaleb Allen to score for the early 4-0 advantage.

Those four opening-inning runs were more than enough for Caleb Connelly on the mound, who pitched a complete game allowing just five hits while striking out seven batters.

Connelly got even more help when the Rebels scored one run apiece in the third and fourth innings before a two-RBI single from Baker in the sixth finished off the scoring.

Shepherd led the way at the plate going 2-for-4 with two RBIs and one run scored. Lew Dale went 2-for-4 at the plate as well, while Allen and Trent Spradlin scored three and two runs, respectively.

Allen was locked in on the mound for Coosa Valley in the second game of the series and allowed just one hit and two walks while striking out nine to lead the Rebels to a 12-0 win and a spot in the quarterfinals.

After a quiet first inning that saw one base runner combined between the two teams, Coosa Valley went on to score runs in four of the next five innings, including four in the second and four in the fourth, to pick up the mercy-rule win in a shortened six innings.

The Rebels got their series started offensively in the top of the second inning with one out on the board when Shepherd doubled to center field.

Shepherd’s double was followed by mistakes from Emmanuel, including two hit batters and an error. The second hit batter brought in the game’s first run before Jackson Bryant drove in two more runs with a two-run single to left field. A fielder’s choice later in the inning brought in Coosa Valley’s fourth and final run of the second.

The Rebels had similar success in the top of the fourth when two walks, an error and a groundout led to three runs eventually crossing the plate. Later in the inning Allen went on to double to center field to drive in the last run of the inning to give Coosa Valley an 8-0 lead.

That’s all the advantage and then some that Allen needed on the mound. The Rebels added one run in the fifth and three in the sixth to create the final score.

Bryant finished the game 2-for-2 at the plate with five RBIs, while Drake Stiles had two RBIs after a 1-for-1 game. Allen, Shepherd, and Zane Jantz all had one hit in the win.

Calera’s two no-hitters lead to sweep in first round

By ALEC ETHEREDGE | Sports Editor  CALERA – From the first game of the 2018 baseball season, the Calera Eagles... read more