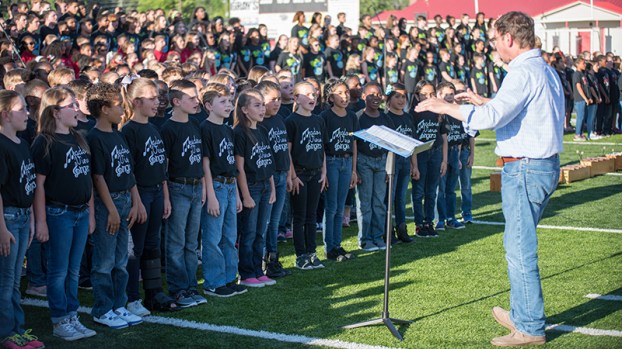 Hundreds of Alabaster choral students will perform at Larry Simmons Stadium on April 26 during the second-annual Earth Alive concert. (File)

ALABASTER – For the second-straight year hundreds of Alabaster City Schools choral students will perform at Larry Simmons Stadium during a late-April event as they showcase their vocal skills.

The second-annual Earth Alive concert will begin at the stadium at 6 p.m. on Thursday, April 26, although gates to the event will open at 5:30 p.m.

During the concert, more than 500 ACS chorus students in grades third through 12th will perform musical pieces inspired by “The Greatest Showman.”

The schools have been working on the music they will perform for the past several months, and will showcase it in multiple performances throughout the night, said Thompson Middle School choir teacher Dori Hardee, who is working to organize the event. By the end of the night, every choir student in Alabaster will have performed, she said.

In addition to the slew of musical performances, the event will include 12 food trucks, several vendors, the Alabaster Fire Department, various school groups and more.

Last year, the event drew between 3,500 and 4,000 attendees, and Hardee said organizers are looking to bring in 5,000 people this year.

This will mark the final time the event will be held at Larry Simmons Stadium, as it will move to the new Thompson High School stadium next year, Hardee said.

“This is really an opportunity for the choir to give back to the community,” Hardee said.