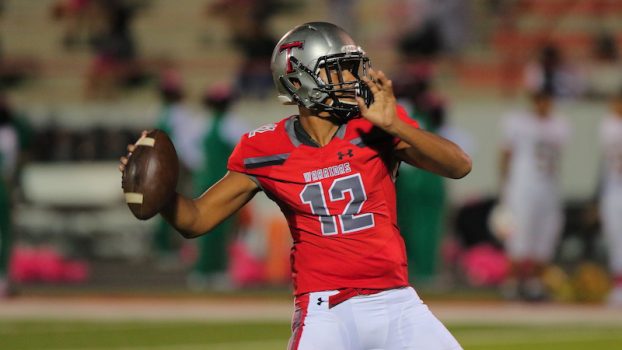 Thompson's Taulia Tagovailoa has committed to play football at the University of Alabama where he will join older brother Tua Tagovailoa. (File)

TUSCALOOSA – Ahead of the University of Alabama’s A-Day game on Saturday, April 21, Thompson High School rising senior quarterback and four-star recruit Taulia Tagovailoa announced his commitment to play football for Nick Saban and the Crimson Tide.

The announcement comes on the heels of a debate of whether Taulia’s older brother Tua Tagovailoa or two-year starter Jalen Hurts should be the starting quarterback for Alabama come fall 2018 when the Tide starts its season against Louisville in the Camping World Kickoff game on Saturday, Sept. 1, in Orlando, Florida.

Taulia and his family moved to Alabaster almost a year ago exactly when Tua made his way to Tuscaloosa so they could remain close.

While reports surfaced that Tua might possibly transfer if he didn’t end up playing in the National Championship game, Taulia has always expressed his interest in joining his older brother at Alabama, which made a transfer unlikely.

Now the 2017 Shelby County Football Player of the Year has made it official after committing to the school.

In his lone season to this point with the Warriors, Tagovailoa stormed onto the scene of football in Alabama, which is a religion and way of life.

With the pressure of performing, he went on to join another popular Alabama name among the high school ranks when he edged out John Parker Wilson for third all-time in AHSAA history for passing yards after throwing for 3,823 yards and 35 touchdowns during his junior season.

That was good enough for 294.7 yards per game and 2.3 touchdowns per game.

But it wasn’t just his numbers that jumped off the page. It was also his presence and the difference he made on the team.

After quickly inserting himself as a leader and making friends with his teammates, Tagovailoa came in and led the Warriors to one of their best seasons in school history.

The season before Tagovailoa got to Thompson, the Warriors finished 5-5 overall and lost three games by three points or less to miss out on the playoffs.

Cue Tagovailoa, who came in and led Thompson to its first win over the Hoover Buccaneers in school history, third trip to the semifinals of the playoffs, first playoff berth since 2007, first time past the second round of the playoffs since 1987 and the school’s first region championship in 20 year.

Thompson also finished undefeated in the regular season for the first time since 1982 before eventually losing to Hoover in the semifinals of the playoffs to finish 2017 12-1 overall.

Sources have said Taulia will attempt to graduate high school early in an attempt to join Alabama in the spring of 2019.

Before that day comes, he’ll have one more chance to lead Thompson to a state championship during the 2018 football season.

His older brother will be a sophomore at Alabama this season, meaning the Crimson Tide could see several years of a Tagovailoa at quarterback in the near future.

By ALEC ETHEREDGE | Sports Editor VESTAVIA HILLS – For the second year in a row, the Thompson Warriors’ baseball... read more