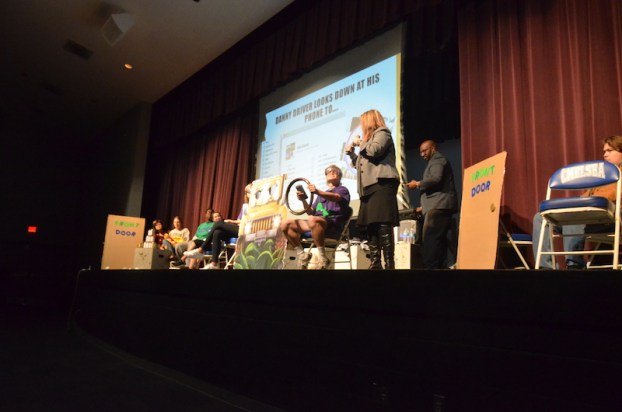 A student wears beer goggles to demonstrate the risk of driving while intoxicated during an assembly before the ChHS prom. (Reporter photo/Amalia Kortright)

The assembly was one of several held in local schools that were organized by Shelby County Drug Free Coalition Director Jan Corbett.

“We want you to have a great time at the prom, make good decisions and not make bad decisions that will affect you for the rest of your life,” Corbett said.

Alvis asked students a series of questions, including how old a person has to be to consume, purchase or transport alcohol. The answer to all of the questions is 21.

“Ignorance of the law is no defense,” Alvis said. “That’s not me saying that. It’s the law that’s saying that.”

To reiterate her point, Alvis had students perform a skit that portrayed the worst-case scenarios involving underage drinking and drunk driving. In the skit, all of the students at a party are arrested and one person is in a coma after a wreck.

Alvis said one of the worst things about drunk driving is that the offender does not get to pick their victim.

Alvis said it is also irresponsible to drive while doing distracting things, like eating, texting and applying makeup.

Alvis also shared the story of how a drunk driver negatively affected the lives of her family.

“I was hit by a drunk driver. I had to get 52 stitches. I thought my 2-year-old was dead, and I was five months pregnant with my son,” Alvis said. “I didn’t find out if he was okay until he was born.”

On Sept. 9, 2015, Cook said his family was forever altered by a driver who was high on marijuana. He said his father, a pastor, was driving home from church with Cook’s mother when their car was struck by an 18-wheeler.

“Just before impact, he laid across my mother and said, ‘Hold on, baby,'” Cook said.

His father was killed on impact, and his mother remained in a coma for a month and a half, connected to several million dollars-worth of lifesaving equipment.

“The accident was on Sept. 9. Her birthday was Sept. 10. She woke up thinking it was her birthday,” Cook said. “She doesn’t recognize us. The first thing she asks is, ‘Where’s Daddy? Everybody says that weed doesn’t hurt anybody. Ask my mom if it hurts.”

To conclude the assembly, Alvis asked students to put themselves in her shoes as a judge and think about how they would sentence a drunk or distracted driver. In addition to potentially hurting or killing an innocent person, Alvis said drunk driving often comes with a lifetime of legal consequences and remorse.

“There has never been anybody who stood before me that said, ‘I meant to get behind the wheel of a car and hurt somebody,'” Alvis said.

As girls cross the finish line of an upcoming 5k, they will be reaching a goal they set months earlier... read more