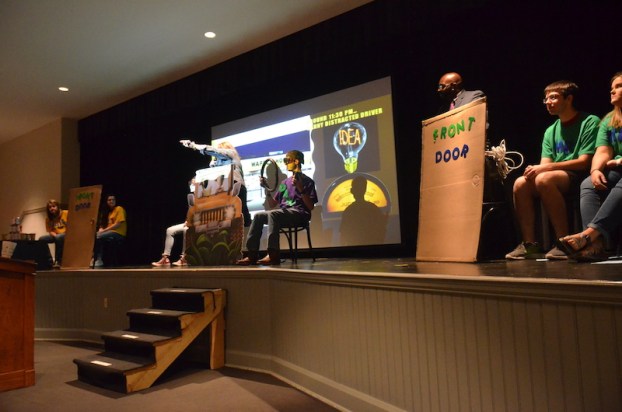 A student pretends to drive while intoxicated during a skit at an assembly. The student wore a pair of beer goggles to demonstrate how drugs and alcohol can impair judgement and slow reflexes. (Reporter photo/Amalia Kortright)

COLUMBIANA – Students at Shelby County High School spent part of the afternoon on Friday, April 20, at an assembly against drunk and distracted driving in the school’s auditorium. The assembly took place shortly before SCHS’s prom.

“It’s not just about prom,” said SCHS Principal Barbara Snyder. “It’s about every weekend and every day of your life.”

The assembly began with a dramatic performance by several students that highlighted the experiences of those who manage anxiety and depression.

Shelby County Circuit Judge Lara Alvis asked students how old they had to be to drink, purchase, transport or be in the presence of alcohol. The answer to all her questions was 21.

She discussed the consequences associated with breaking those laws, including legal fees, regular drug testing, and having parents or guardians added as parties in the case.

“Your life comes under serious scrutiny at that point,” Alvis said.

Alvis called up several students to perform a skit that portrayed the worst outcome of a situation involving underage drinking and drunk driving. During the skit, several students were arrested at a party and one person was critically injured in a wreck.

Shelby County Community Corrections Executive Director Julius Cook also gave his testimony of how he lost a loved one because of another driver’s bad decision.

Cook said his father, a pastor, preached his last sermon on Sept. 9, 2015. His father and mother were on their way home when an 18-wheeler collided with their car. The driver was high on marijuana.

Cook said his father was killed upon impact, and his mother was in a coma for a month and a half.

“By the grace of God, she woke up. My siblings and I were standing in the room, and she asked, ‘Who are you?’ The first thing she asked was, ‘Where’s Daddy?'” Cook said.

Cook said his father’s death has had a lasting effect on his community and family, especially his mother.

“Every day, my mom wakes up in pain,” Cook said. “Not just physical, but emotional and mental.”

While he does not condone underage drinking, Cook said he would rather a teenager call their parents or guardians to pick them up than get behind the wheel of a car.

Alvis also recounted her experience with a drunk driver. She said she was five months pregnant with her son, and her 2-year-old daughter was injured in the accident. Alvis did not find out whether her son would be fine until he was born.

Alvis asked students to think about what they would do if they were the judge in a similar drunk driving case.

“Nobody has ever stood in front of me, ever, and said they meant to kill someone with a car,” Alvis said.

According to Alvis, the assembly at SCHS was the last of several similar events that were held in high schools throughout Shelby County and thanked Shelby County Drug Free Coalition Director Jan Corbett, who organized them. Alvis closed the assembly by gifting Corbett with a framed Shakespeare quote, a Shakespeare pen and tickets to the Shakespeare festival.

HOOVER – Hoover City Schools Superintendent Kathy Murphy will remain in her position after she was passed over for the... read more