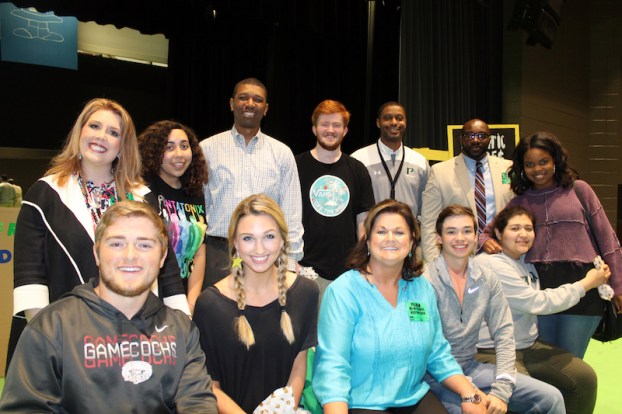 “How old do you have to be to drink alcohol?” Judge Lara Alvis asks Pelham High School juniors and seniors. Students respond with serious and comical answers and sometimes—silence. Alvis continues.

“To attend a party where alcohol will be served?”

After Alvis’s questions, 21 flashes on the screen behind her.

“Twenty-one is the right answer to every question,” she says. What follows is Alvis directing PHS students in onstage skits detailing distracted driving consequences. One student takes a mock sobriety test in beer goggles. Designed to mimic the effects of alcohol on vision, beer goggles prevent a talented athlete from walking a straight line.

Working with the Shelby County Drug Free Coalition, Alvis and other volunteers share their safe driving presentation with local high schools before their proms.

Spending a couple of hours away from the bench a few times in the spring requires sacrifice, but Alvis makes up time with short lunches at her desk. This judge’s determination to impact students is admirable.

“Kids believe that tragedy happens to others. Science supports the teenage tendency to be impulsive. If teens plan ahead, they can make good decisions. Without planning, their tendency is risky behavior.”

Closing the presentation, Executive Director of Shelby County Corrections Julius Cook shares his family’s distracted driving tragedy. Cook’s story of losing his father and nearly losing his mother to a driver impaired by marijuana brings a hushed silence over the auditorium.

Student realizations that changing songs, applying make-up and eating while driving were dangerous behaviors brought commitments to change their habits. Julius’s Cook’s story gave students a new perspective. Losing their own lives seems unlikely to teens, but losing parents hits a nerve—and the idea of losing parents brings their own mortality into play.

“Lives have been taken and destroyed by distracting driving,” said senior Jamie Abbott. “I’m not ready to lose the people closest to me.”