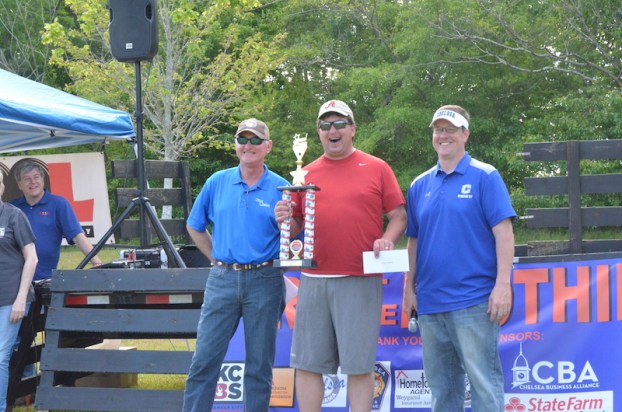 A member of the Wright on Q barbecue team accepts the title of Fire at the Foothills Grand Champion. (Reporter photo/Amalia Kortright)

CHELSEA – The city of Chelsea’s Kiwanis Club and Fire Department raised thousands of dollars through its eighth Fire at the Foothills BBQ and Chili Cook-off on the afternoon of Saturday, April 21.

Funds raised through the barbecue competition were donated to several nonprofit organizations that serve local children and proceeds from the chili cook-off benefitted the fire department’s public education division.

The event was free to the public, but donations from visitors were encouraged and appreciated, according to Kiwanis Club Treasurer Mike Denton.

“We were down a little on the number of cook teams this year, but tips and attendance were well above last year,” Denton said. “The folks in the Chelsea community are very generous, for which we are grateful.”

There were 10 entries in the barbecue competition, which was certified by the Alabama Barbecue Association and the Kansas City Barbecue Society. The Wright on Q barbecue team took home first place for its chicken. Lee-La Q won in the ribs division, and Cookin’ with Wood placed first in the pork category.

The People’s Choice Award, which is determined by which team raises the most money through donations, was given to Team Spirit BBQ. The Reserve Grand Champion was Lee-La Q, and Wright on Q was named the overall Fire at the Foothills Grand Champion.

Of the 13 entries in the chili cook-off, the chili prepared by Chelsea City Council member Cody Sumners was chosen as the best.

Kiwanis Club President Elise Hearn said the weather that day was perfect for an event like Fire at the Foothills.

Fire at the Foothills, which has traditionally been held in the parking lot of Tractor Supply, took place at the city hall building this year. Hearn said the new location was picked to accommodate for the events growth while offering vendors and barbecue teams an easier space to move their equipment and an indoor area.

Mayor Tony Picklesimer said city officials had initial concerns about hosting the event at city hall, but “could not be more pleased” at how it turned out.

“I’m proud of it. It really went well,” Picklesimer said. “We’re going to do nothing but grow and get bigger.”

Hearn said Fire at the Foothills was a fun event for everyone, and she enjoyed seeing the community come together.