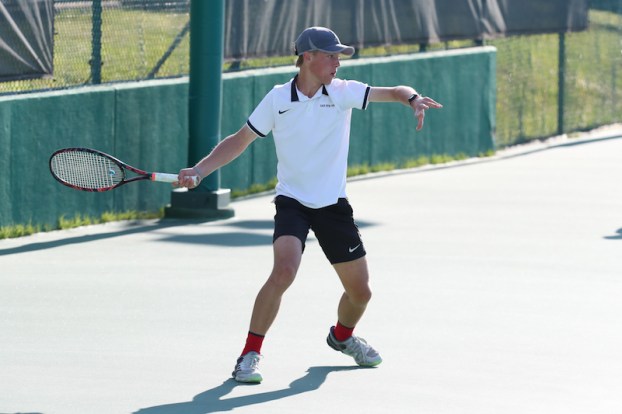 Oak Mountain's Zach Matuszak prepares to hit a forehand during the state tournament. The freshman tennis player went on to finish his season in the semifinals. (For the Reporter/Dawn Harrison)

The young player for the Eagles was able to make a run to the semifinals of the state tournament before losing to Fairhope’s Will Dotson in straight sets after dropping two tie breakers.

Ranked as high as the second best tennis recruit in the state in the Head recruiting list and the 235th best recruit nationally, Matuszak has been playing for the Oak Mountain varsity tennis team since the seventh grade.

“His composure continues to get better and better for us,” said Oak Mountain head tennis coach Kent Jackson. “He has been a very good player for us over the last couple of years and we have high hopes for him in the future because he’s so polished on the court.”

After receiving a bye in the first round of the state tournament, Matuszak went on to beat Mountain Brook’s Andrew Karcher in straight sets (6-2, 6-2) to advance to the semifinal match against Dotson.

The moment, however, wasn’t too big for the Oak Mountain freshman who had his chances to win the semifinal match.

Both sets went to a tie break, but in each of the two sets, Matuszak had a set point that could have either put him up 1-0 or tied the match 1-1 to force a third set.

“It wasn’t a great match for him in terms of having trouble with his serve and making mistakes, but he battled and still ended up earning several set points,” Jackson said. 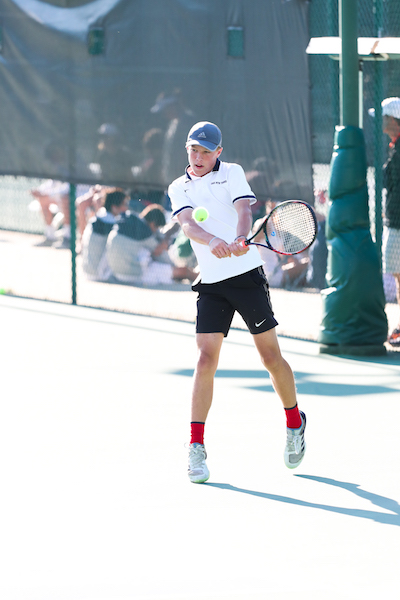 Dotson went on to win the first tie break 7-1 to take the opening set for a 1-0 lead in the match.

The second set tiebreak, however, was the more thrilling of the two. In a back and forth tiebreak that was forced all the way to 11 points, Dotson eventually came out on top by a final of 11-9 to advance to the championship match.

“He faced off against a really good player today and competed extremely hard,” Jackson said. “Just like any sport, he caught some bad breaks with points clipping the net and getting the wrong ounce, but it’s one of those matches that was hard fought and you just tip your cap to the other guy.”

Coming into the tournament, Matuszak had just competed in a weekend tournament in Mississippi and actually slept the entire car ride to Mobile ahead of his Monday matchup to get as much rest as possible.

To clinch a spot in the state tournament at all, it also took some intense pressure-packed play from Matuszak.

Competing in one of the most difficult tennis areas in the state with teams like Vestavia, Mountain Brook and Spain Park, earning a spot in the state tournament is no small feat.

During area play, Matuszak lost to Vestavia Hills’ Alex Lloyd for his only loss of the season, but during the sectional meet, he went on to get redemption by beating Lloyd to earn a spot at state.

Since the Eagles missed out on qualifying as a team due to Vestavia and Mountain Brook both advancing, that was Matuszak’s only chance to make it to the state tournament.

Oddly enough it’s the second time that’s happened for the Eagles in the last three state tournaments. Two years ago, Alex Laycock made it all the way to the semifinals before losing to a Fairhope player in the semifinals.

“It was a really fun experience to be a part of this year,” Jackson said. “I am so proud of his accomplishments and what he has done for Oak Mountain tennis.”

From a team standpoint, Jackson said the Eagles are losing just one senior and despite him being a team leader, there are several guys anxious to pick up that leadership role. That along with the return of several young players has him hopeful for the team’s future.