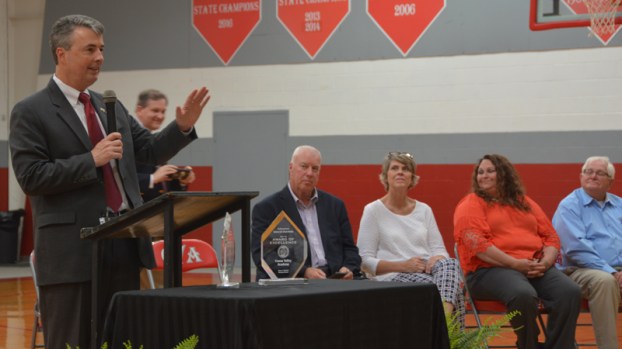 School recognized for commitment to safety

The tragedy of someone opening fire in a school has become all too common in the United States. We seem to hear of another such deadly incident while we are still pondering the horror of the last.

Students and others have pushed for stricter gun laws in hopes of safer schools, while some worry about the resulting infringement on Constitutional rights.

Regardless of the national conversation, there remain steps that can be taken at the local level to provide secure environments in which our future leaders can learn.

Coosa Valley Academy in Harpersville is a shining example of this local action. On Wednesday, April 18, the school was presented the Attorney General’s Safe School Initiative Award of Excellence for the third year in a row.

Alabama Attorney General Steve Marshall presented the award, as CVA was one of 10 statewide winners.

“In these times, we are all intensely aware of the serious responsibility our schools carry for the safekeeping of our children,” Marshall said. “Recent events have been heartbreaking reminders that we must remain vigilant and committed to provide the best protections possible in Alabama’s schools.

“Each day that parents leave their children at school, they are entrusting what they hold most precious into the care of schoolteachers, principals, school resource officers and other staff. With these awards, we honor those who have achieved particularly high standards and set examples that others may follow.”

School shooting across the country have taught us that such tragedies can happen anywhere. It is encouraging to see a local school and community committed to doing what they can to be prepared.

Newsprint supply is tightening, and you are affected

By TIM PRINCE/Publisher The paper (newsprint) used to print the Shelby County Reporter cost 10 percent more than it did... read more