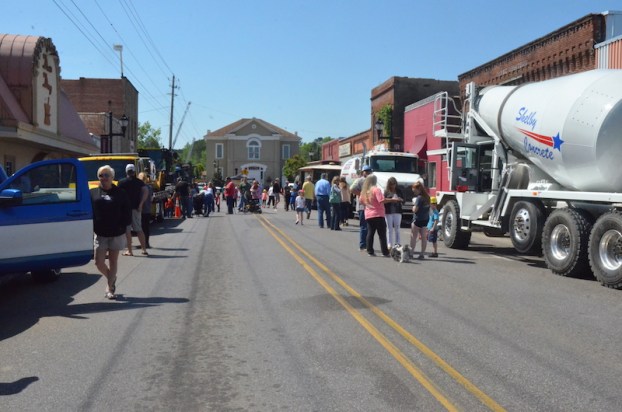 The southern portion of Main Street in Columbiana was closed off in order to let local kids view and explore trucks and utility vehicles from different businesses, organizations and agencies. (Reporter photo/Amalia Kortright)

COLUMBIANA – Vehicles of all shapes and sizes lined the southern part of Main Street in Columbiana for locals to view and explore at the second annual Touch a Truck event from 9 a.m. to noon on Saturday, April 21.

The event was organized and co-sponsored by Columbiana Main Street and Kyle Mims of Edward Jones and featured a variety of vehicles that are utilized by local organizations and agencies including the city of Columbiana, Shelby County Schools, the Shelby County Sheriff’s Office, the Columbiana Police Department, Shelby Concrete and TredWear LLC.

“This is a free, family event and we want to give back to our community,” Mims said. “This involves a lot of the businesses that serve the community.”

“Most of our large equipment is from Columbiana or Shelby County,” Columbiana Main Street Director Brenda Sands said.

Monica Clayton of TredWear said she was glad to watch the kids’ faces light up when they got into each vehicle.

“It’s great to be here and watch the children see the vehicles that they dream about seeing,” Clayton said. “Watch that imagination turn on.”

Members of the Peake family said they attended Touch a Truck both years, and used it to celebrate their son, Colton’s, birthday. Colton said his favorite part of Touch a Truck was getting on one of Columbiana’s trolleys

“We came last year, and we had to come back,” Lisa Peake said. “It’s a good experience to see everything up close.”

Sands said the first Touch a Truck event in 2017 had such a positive effect on the community that they decided to make it an annual event.

“It was such a big event last year. (Mims) felt the need to satisfy the needs and curiosity of the kids who wanted to see the trucks up close,” Sands said. “I want to say it’s for the children, but the adults seem just as excited.”

Sands said this year’s Touch a Truck attracted a wonderful crowd, and thanked the CPD and SCSO for not only displaying several vehicles, but also for blocking off the road and keeping the area safe.