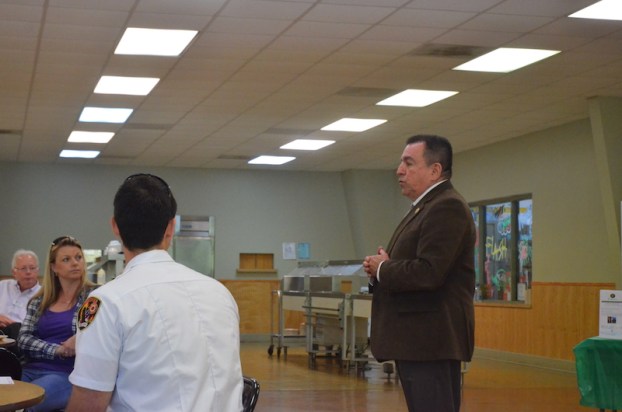 Samaniego began his presentation by talking about the relationship that Westover business owners uphold with the Shelby County Sheriff’s Office.

“Our job and our mission here is to apply public safety for you, the citizens, but also for you, the business people,” Samaniego said.

According to Samaniego, business owners are instrumental to the well-being of the county.

“They are so nice to invest money in this county,” Samaniego said. “As the result, taxes allow the county commission to better the quality of life for each individual. In essence, I really put a lot of stock in businesses all over the county.”

Samaniego said the SCSO focuses on local businesses to make sure that they don’t fall victim to thefts, vandalism, burglaries or robberies, especially during the weekends and after hours.

“We encourage everybody to put cameras up in their businesses. Primarily it’s to protect them from liabilities, but if you’re victimized, we can grab some footage,” Samaniego said.

Samaniego said anyone who sees any suspicious activity is encouraged to immediately dial 911 for assistance. While the SCSO does not contract with Westover for law enforcement services, Samaniego said he hopes to change that in the future.

“Even though they’re not in Westover all the time, they are there fast. We use them often, almost on a daily basis. They do everything we need them to do, and then some,” Penny said.

According to Penny, Westover officials are also focusing on taking preventive measures before accidents or crimes occur.

“We’re going to go to every business that has a storefront in the city one time a year, not just to point out problems, but to educate people and stop things from happening,” Penny said.

He said many local businesses with alarm systems have installed Knox Boxes, which contains keys to the building that only first responders can access.

“A lot of times, there are false alarms, and we don’t want to get there and rip up $2,000 worth of doors on the front of your building,” Penny said.