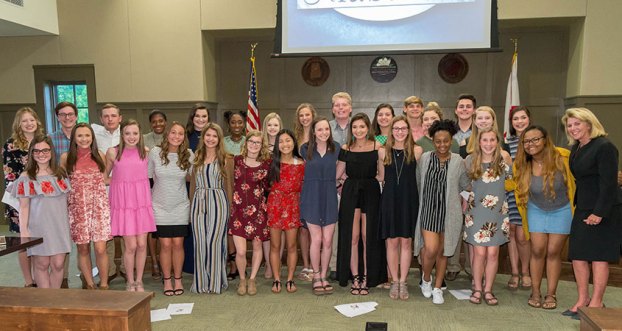 A group of 31 local teens were sworn into the Alabaster Teen Council for the upcoming year during an April 23 City Council meeting. (Reporter Photo/Neal Wagner)

Who was named to Alabaster’s Teen Council?

ALABASTER –Several new and returning faces will have a direct say in the city’s youth-oriented offerings while learning more about their community over the next year, as the 2018-2019 Alabaster Teen Council took its oath of office during an April 23 City Council meeting.

Thirty-one teens who attend schools in Alabaster were selected to be on the Teen Council for the upcoming year, and several of them will be serving their second year with the group.

During their time serving on the council, the teens will complete a team building day at Family Connection before holding regular meetings with Mayor Marty Handlon and will be involved in organizing teen-focused events such as movie nights and a water slide day this summer.

The purpose of the Teen Council is to “create an informed group of students who are familiar with municipal issues, to develop long-lasting relationships between students and city leaders, to sustain youth presence in a broad range of impact and decision-making areas across the community, to develop future civic leaders and to organize events for community teens.”

“They will learn so much about the city and how the local government operates,” Handlon said before the ceremony.

The following teens were sworn in during the April 23 meeting:

By NEAL WAGNER / Managing Editor ALABASTER – A longtime volunteer and familiar face in the city’s schools will serve... read more