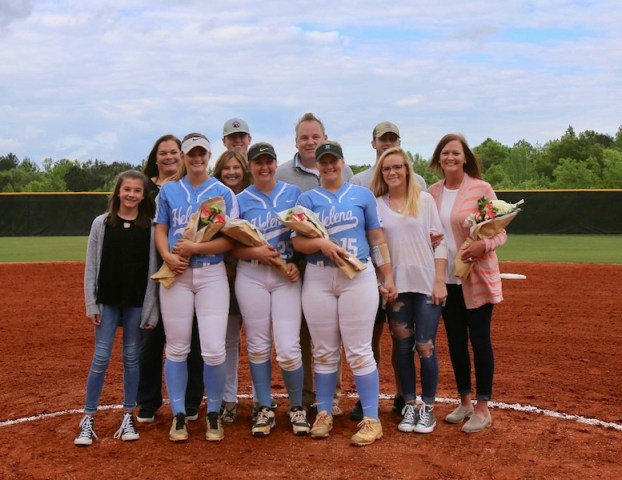 Three seniors on the Helena High School varsity softball team were honored on senior night prior to the game against Hewitt-Trussville on Tuesday, April 24. (Contributed)

HELENA–The Helena Huskies softball team came away happy after defeating Hewitt-Trussville 5-3 on Tuesday, April 24, but for three teammates, it meant a little more as it would be the last time they suited up for a regular season home game at HHS.

Seniors Jamie Gregg, Katie Lively and KK Wilson were all honored prior to the game as the Huskies celebrated senior night against the other Huskies of Hewitt-Trussville.

Gregg and Wilson both helped the Helena Huskies at the plate as Wilson finished 2-for-2 with a solo home run and two runs scored while Gregg added an RBI-double in the second inning.

Helena did most of its damage in the bottom of the second inning by scoring four of its five runs in the frame.

All four runs came with two outs in the inning as Peyton Wilkins got things going with a two-run home run to centerfield to make it 2-0 Huskies. This was followed by a walk, RBI-single and an RBI-double from Gregg to extend the lead to 4-0.

Helena’s fifth run came in the bottom of the sixth inning when Wilson led off the inning with a solo home run to make it 5-2.

Hewitt-Trussville added a run in the top of the seventh inning cutting Helena’s lead to 5-3 but a double play and ground out ended the game as Helena got the win.

Peyton Doriety got the win for Helena in the circle as she gave up just three hits in six innings of work while striking out three.

With the win, Helena improved to 26-9 on the season and will soon turn their attention to post season play.