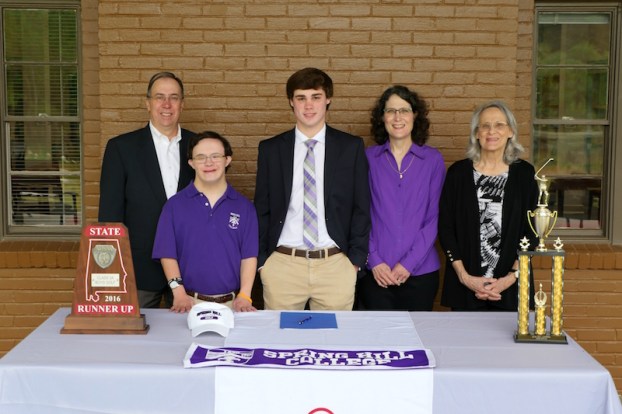 NORTH SHELBY – One of Indian Springs’ best golfers will now be continuing his academic and athletic career at the collegiate level after signing his letter of intent on Tuesday, April 24.

Springs’ senior Pete Schilli officially signed his scholarship to attend Spring Hill College in Mobile at a signing ceremony held on the Indian Springs campus in front of family and friends.

“His drive—from a golfing standpoint and a metaphorical standpoint—and his sense of humor have made it such a pleasure and privilege to get to know him,” said Springs’ head golf coach from 2014-2017 Paul McGee. “I have no doubt that as he goes to Spring Hill he will be nothing but successful academically and athletically.”

Schilli has been a member of the golf team since his eighth grade year with the school and helped Indian Springs reach the state tournament in both 2015 and 2016.

In 2016, Schilli and the golf team went on to finish second at the state tournament overall with an aggregate score of 639, which wasn’t too far behind state champion Westbrook Christian’s score of 612.

A year later, Schilli competed in his third consecutive state championship and finished sixth overall in the individual standings. Now in 2018, he’ll look to improve even more as he fights for a spot in his fourth straight state tournament.

Schilli also competes competitively and often off the school team and has won the Inverness Country Club Junior Championship the past three years in a row.

“The first time I saw Pete swing a golf club, I could see straight away that he had a tempo and a natural talent that were awesome to watch,” McGee said. “It has been a pleasure and a privilege to see Pete develop that talent.”

He also finished in a tie for second at the Birmingham Golf Association Championship and has six top 20 finishes in Southern Junior Golf Tour events, including a high finish of fourth in an event at Timberline on July 18, 2017.

Outside of golf, Schilli has volunteered his time to help with Special Olympic bowling and the Miracle Softball League. He also works at Inverness Country Club and has several AP credits from school.

Spring Hill College is a Division II school that has had plenty of recent success in the sport, including seven top three finishes in tournaments last year and four more so far during the 2017-18 season.

Schilli will look to help continue that success when he joins the team next year and continues playing the sport he loves.

“I’m very excited about attending Spring Hill,” Schilli said. “I think I’m going to enjoy the atmosphere there and am also looking forward to having the opportunity to travel to new places to play golf.”

For now, he hopes that he’ll end his high school golf career at Indian Springs with a state championship, while also reminiscing about all of the great lessons the school gave him.

“Springs has helped me tremendously throughout my five years to learn how to manage my time with the academic workload and also dividing up time with friends and playing golf.”