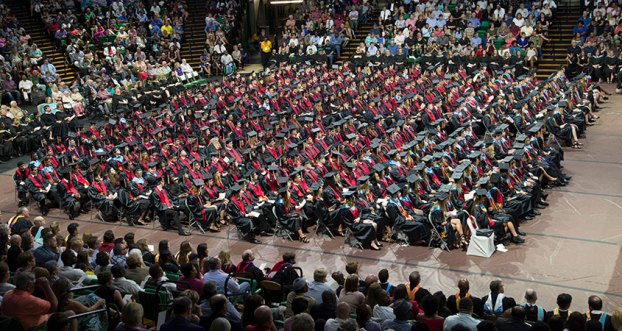 Thompson High School’s graduation will be held on Tuesday, May 21, at 6 p.m. at UAB’s Bartow Arena. (Reporter Photo/Neal Wagner)

ALABASTER – An accomplished Alabama attorney who is leading the effort to expand the state’s pre-kindergarten program to all 4-year-olds will present the keynote address at Thompson High School in late May, the school announced on April 24.

Elizabeth “Liz” Huntley will serve as the featured speaker at Thompson High School’s commencement ceremony, which will be held on Tuesday, May 22, at 6 p.m. at Bartow Arena in downtown Birmingham.

Huntley is litigation attorney, and dedicated child advocate, author and lecturer. She practices law at the Lightfoot, Franklin and White, law firm in Birmingham.

In addition to handling large complex corporate litigation matters, Huntley is regularly appointed by judges to represent the legal interests of children in civil cases. She is also frequently asked by governmental agencies to consult on issues impacting children, including the development of legislation to protect youth.

She is a leader in the movement to expand access to high-quality Pre-K to all 4-year-olds in Alabama and has received several state and national awards for her work. She was recently named to the “This is Alabama” 2017 class of “Women Who Shape the State.”

Huntley regularly speaks to groups all over the country, often referencing her own journey as described in her book titled “More Than A Bird.”

Huntley and her husband, Tony, live in Alabama with their three children.

ALABASTER – On the morning of Tuesday, April 24, students entering pre-K and kindergarten and their parents had the opportunity... read more