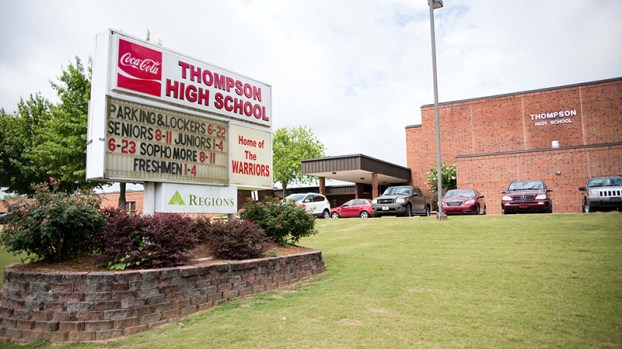 The Alabaster City School system will not transform the former Thompson High School building, pictured, into the new Thompson Middle School and Sixth Grade Center until the summer of 2019, according to ACS officials. (File)

ALABASTER – The Alabaster City School System will implement its plan to move the campuses of Thompson Middle School, Thompson Intermediate School and Thompson Sixth Grade Center to new locations in the summer of 2019, not this summer as originally planned, school system leaders said on April 25.

ACS then would have moved the current Thompson Intermediate into the former TMS building on Kent Dairy Road.

“I’ve got to applaud our teachers at the high school, because they did a great job of making the school look good,” Vickers said of the old THS campus. “Once it was empty, all of the areas we need to concentrate on were exposed.”

Vickers and Alabaster School Board President Adam Moseley said the renovations to the building and its roof could not be properly completed in a few months.

“A lot of the issues we found with the building, we didn’t know they were there until the building was empty,” Moseley said. “It needs a lot of repairs. We said ‘Let’s make sure we do it right and get it fixed the way it needs to be fixed.”

Vickers said he met with the teachers at the affected schools on April 23 to tell them of the decision to delay the moves.

“This is what’s best for the system long-term. This building is going to be used for a long time to come,” Moseley said. “We want to make sure the kids (coming from the current middle school) are coming to a building that’s just as inviting and welcoming as the building they were leaving.”

By NEAL WAGNER / Managing Editor ALABASTER – An accomplished Alabama attorney who is leading the effort to expand the... read more