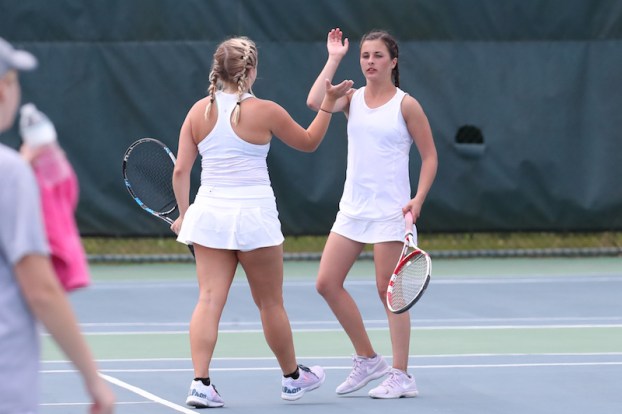 Katelyn Bussey and Callie Ware share a high five during a doubles match. The two went on to win a doubles state championship for the Lions. (For the Reporter/Dawn Harrison)

MOBILE – Every year since 2009, the Briarwood Christian School girls’ tennis team has finished inside the top five at the state tournament and did so again in 2018 after finishing as runners-up to UMS-Wright on Tuesday, April 24, in Mobile.

“I knew coming into the season we could finish inside the top five pretty easily, but thought it would take a special effort to win a state championship,” Mears said. “We lost our No. 1 player coming into the year, but this team responded and fought hard for their success. I’m so proud of where they ended this season.”

While no individual champions were crowned and UMS-Wright won the overall title with a final score of 81 points compared to Briarwood’s second-place total of 59, the Lions did end up winning a doubles state championship from Bussey and Ware, who battled exhaustion to bring home the title.

“It was an awesome finish for them,” Mears said. “Both had a grueling two days, including a three-hour match for Callie to end Monday night. That led into Tuesday and they were completely iced down under tents drinking pickle juice and mustard to avoid cramps.”

After their 30-minute break was over, Bussey grabbed a mustard packet, downed the mustard, threw the pack down and said let’s do this.

“You saw the competitive edge come out in her and it got Callie up and going as well,” Mears said. “For them to come out on top in doubles after all of the matches they played was incredible.”

While those two players had an incredible season, all of the players competing at the state meet had a strong ride and were key to this team’s success.

“Chemistry was really key for our team,” Mears said. “Before the season, we try to make sure we set the team up to be successful because they have the talent to do whatever they want to. As a coach, you just have to put them in the right situation as a team.

“I think it helps that we do everything as a team. With me being the boys and girls coach, I make sure we are all one big family and they’ve really bought into that.”

Briarwood will lose a handful of seniors next year, but will also return some key pieces and at this point, there is no reason for Mears to not expect another top-10 finish from his team in 2019.