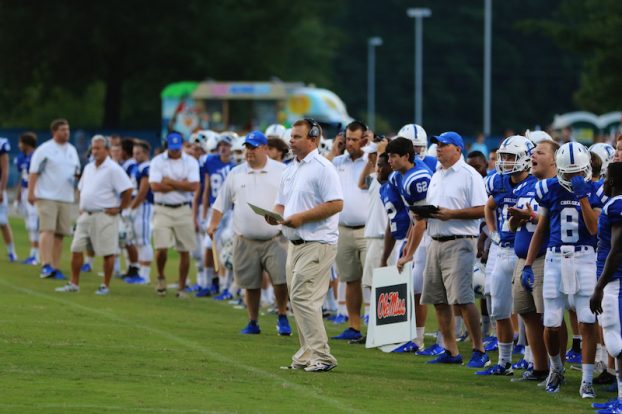 Chelsea head football coach Chris Elmore, above, has been approved to be the next head coach at Fort Payne High School–his alma mater. (File)

Chris Elmore stepping down at Chelsea, heading to Fort Payne

CHELSEA – After five years leading the Chelsea Hornets’ football program, head coach Chris Elmore has made the difficult decision to step down and take a new job.

On Thursday, April 26, Elmore was approved as the new head coach of the Fort Payne Wildcats, the same school he graduated from and his dad Jerry Elmore spent 14 years as a head coach from 1984-1998.

“I really wasn’t planning to leave Chelsea at all,” Elmore said. “But if there is one job out there that any coach wants and it comes open, it’s his alma mater.”

It made this decision extremely difficult for Elmore despite it being that one job he’d even consider leaving Chelsea for.

“It’s definitely been bittersweet the last two or three weeks,” he said. “I wasn’t looking for a job. I was happy, my family was happy and the community, parents and players were all doing everything they could to make this job so much fun.”

While it was a difficult decision because of the love he had for the city of Chelsea, Elmore eventually started feeling more and more comfortable about the job in Fort Payne after talking to the principal and Superintendent Jim Cunningham, who was actually his middle school football coach.

“I tried not to put too many emotions into making the decision,” Elmore said. “If I was miserable at Chelsea, it would have made this much easier.”

It’s been 24 years since Elmore played for the Wildcats and 20 years since his dad was the coach, and now that he has made the decision, he is excited and can let the emotions soak in.

“Now that I’ve accepted it, it’s such a special opportunity that I can’t wait to get started,” he said. “Being a former player, I’ll have a lot invested in this job. I really want this to be successful.”

Elmore is having to step in and fill big shoes after former head coach Paul Ellis decided to retire after 14 years of leading Fort Payne. Ellis ended up passing Jerry Elmore (95) for most wins in school history with 109.

“It’s going to be a challenge,” Elmore admitted. “They tell you in the coaching business not to follow somebody who’s been successful at one program for long time and now I’m doing it for the second time.

Elmore’s dad took over a struggling program over in 1984 that every team wanted to schedule and turned it into a program that teams stopped wanting to schedule, and Ellis continued that trend of success in his tenure.

Now Elmore hopes to do the same thing for the Wildcats.

“I’m going to try and continue that tradition,” he said. “It’s not a rebuilding process by any means. I want to take what they’ve done and see if I can maintain it and improve on it. Both of those guys have had such a positive impact in the community and have affected so many people in last 30 years. “

Elmore went on to say that he doesn’t need to change a lot because of Ellis’ success but hopes to continue building the program up so he can bring the school its first state championship.

While he is off to a new school, Elmore said he’ll still be checking on Chelsea every Friday night.

“It’s a tough move for our family, and I will be keeping my eye on Chelsea in the years to come because of the relationships I’ve built here,” he said. “I’ll be looking at the score updates every Friday night.”

Elmore added that he hopes the two teams don’t meet in the playoffs because that would be tough to handle, saying he just wants to see those guys do nothing but succeed.

For the time being, defensive coordinator Zeb Ellison will take over as interim head coach for the remainder of spring and will most likely have a chance to win over the job as well.

Chelsea will still play its spring game scheduled for May 10 against Vestavia.

Elmore said he was extremely excited about nest year’s Chelsea team. It’s a team that will return just about everybody, including sophomore Collier Blair, who he couldn’t talk enough about.

“Whoever the coach is will have a good chance to win a lot of games next year,” Elmore said.