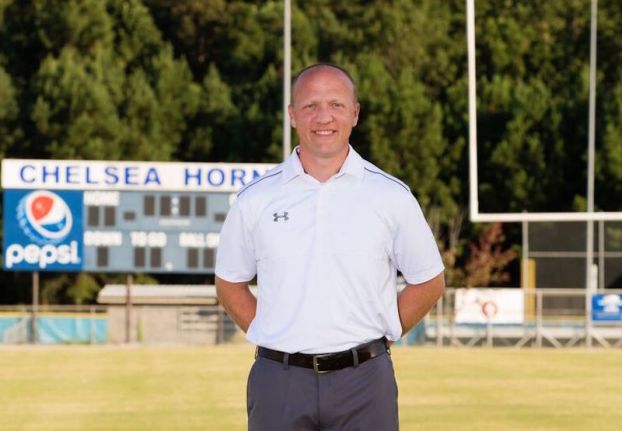 Jamie Scruggs, a former assistant at Calera, Chelsea and Vincent, has taken over the head coaching job at Coosa Valley Academy. (Contributed)

HARPERSVILLE – The Coosa Valley Rebels have found their next head football coach and it’s a familiar county name in Jamie Scruggs, who comes to the school from Chelsea High School.

Scruggs spent the 2017 football season as the quarterbacks coach for the Hornets and knew this was the right time to make this move for he and his family.

“I would like to thank our Headmaster, Mrs. Pam Lovelady, as well as the great coaches and players I’ve been blessed to work with the last 12 years in the profession,” Scruggs said. “I’m seeking the Lord daily to guide me in making disciples of the student-athletes at CVA.  I’m thankful to be in an environment where we can provide them with a Christian athletic experience.”

Scruggs is excited to take over the job and has already taken the job on in full force. He is taking over a team that was a combined 0-19 between 2014 and 2015, and a combined 5-16 the last two years.

With this hire, Coosa Valley will hope to return to its 2010 form when the team finished 11-2 to win the state championship. The team showed some promise last year under first-year head coach Dane Reece, who also coaches the baseball team.

The Rebels will return several key pieces to the team in 2018, which will help Scruggs, an offensive guy, to have success in year one.

Prior to his one year at Chelsea, Scruggs spent time with former Calera and Vincent head coach Wiley McKeller as his offensive coordinator.

He spent four years at Calera with McKeller and played a part in the Eagles going a combined 35-11. The team set a school record with 370 points scored in the regular season during Scruggs’ first year.

A year later he improved that to 501 points scored and 50.1 points per game in the regular season. The offense also averaged at least 401 yards per game in his final three years before moving to Vincent with McKeller to take on a rebuilding effort.

“Coosa Valley has made a home-run hire in Jamie,” McKeller said. “He is the best assistant coach I have ever had. More importantly, he is a fantastic Christian example to young people. He is also well respected in the college coaching world. The athletes at Coosa Valley are about to benefit greatly from his ability to connect them to coaches at the next level.”

Scruggs said he is excited for this opportunity and can’t wait to turn this program into a team that is contending every year.

Chris Elmore stepping down at Chelsea, heading to Fort Payne