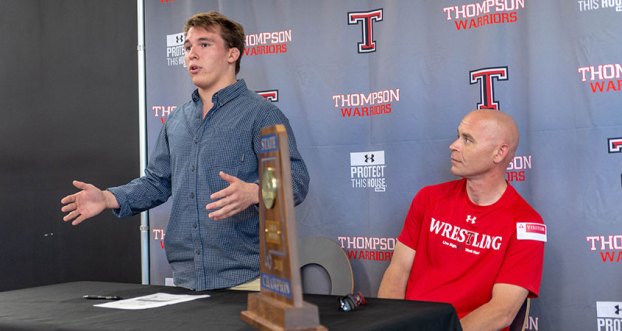 ALABASTER – Thompson High School wrestler will be helping a collegiate program get its team off the mat, as he was among the first to sign with the school’s inaugural wrestling program during an April 27 ceremony.

THS senior wrestler Jackson Araneta signed a scholarship offer from Midway University in Midway, Kentucky, while surrounded by teammates, friends, family members and coaches during the ceremony in the THS cafeteria.

“Thank you to everyone for coming out today. You’re why I’m where I am today,” Araneta said. “I wouldn’t be in this spot without anyone in this room. I want to especially thank (THS head wrestling coach Shawn) Weltzin and (assistant coaches Chris) Pike and (James) Barnes.

“Thank you for everyone. I love you all,” Araneta added, as he put on the 2018 7A wrestling state championship ring and signed the scholarship offer.

Araneta became the second THS wrestler this year to sign a collegiate scholarship after teammate Seth Whitlock signed with the University of the Cumberlands a few weeks prior. The two have played a major role in the THS wrestling program’s success over the past several years.

Earlier this year, the Warriors regained their status as the top wrestling program in the largest high school classification in the state, winning their first 7A state championship in two years.

Shelby County has some of state’s best football recruits