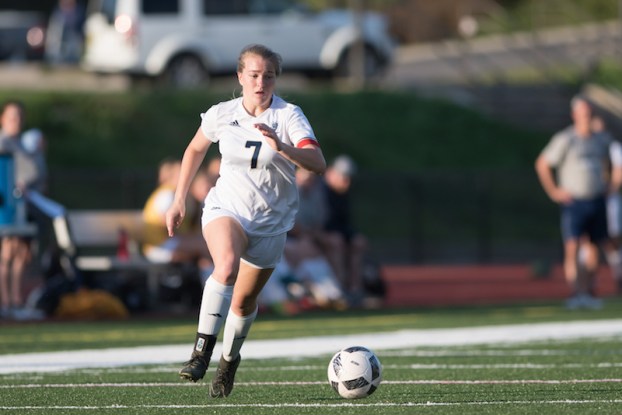 Briarwood senior Alex Broughton pushes the ball up field. She helped lead the team to an easy 10-0 win in the first round of the playoffs on Friday, April 27. (Reporter photo/Keith McCoy)

NORTH SHELBY – When the night began just one victory separated the Briarwood Christian Lions and the Sipsey Valley Bears, but by the end of the night 10 goals separated the two squads as the Lions dominated from start to finish to take the first-round playoff matchup by a final of 10-0 on Friday, April 27.

“It was good for us to break out and score in this one,” said Briarwood head coach Ryan Leib. “Scoring has been tough for us this season because we’re a young team so it was good for our kids to get some confidence going into the next round.”

With an inexperienced team, Briarwood turned to its seniors who are looking to end their career with two straight state titles, and they did not disappoint scoring five goals in the first 11 minutes and holding a 6-0 advantage at halftime.

Seniors Peyton Feemster and Alex Broughton scored two goals each in the first half which opened up opportunities for their younger teammates.

“Alex is one of our most dynamic attackers, she creates a lot for us and can score as well. We need that from her as a senior captain,” said Leib. “And Peyton does a lot for us as well along with setting her teammates up.”

Junior Carrie Kwarcinski kicked off the scoring by rebounding the ball in a wild scrum on the team’s second corner kick of the game. She went on to score two goals as well.

Sophomore Olivia Ricks got in on the action as well deflecting the ball off a Bears defender for the team’s sixth goal in the 19th minute.

Pace changed dramatically when many of the bench players entered the game soon afterwards.

The big lead allowed a lot of valuable minutes for the bench which proved fortunate as the Lions finished the game 13 minutes into the second half.

In 53 minutes of play, Briarwood had a fitting start to the playoffs not allowing a single shot on goal.

On the other end the Lions offense took 27 shots putting 15 of those between the posts. The Lions will head out on the road for their next matchup with Alabama Christian Academy on Tuesday, May 1, at 5 p.m.

By Chris Megginson | For the Reporter MADISON – After opening the AHSAA Class 7A baseball playoffs with a 12-3 win,... read more