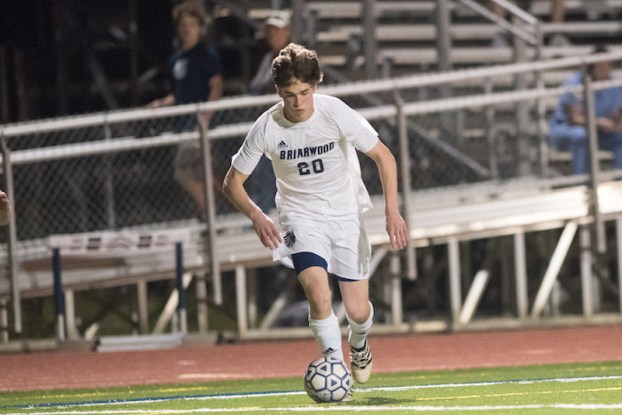 NORTH SHELBY – The No. 1 team in 5A left no doubt in the first round of the playoffs as the Briarwood Christian Lions used several prolific scoring spurts to make short work of the Holt Ironmen, 10-0, on Friday, April 27.

The win moved the Lions record to 20-2-1 on the season and advances BCS to the second round of the playoffs.

The Lions started things off with a flurry as Logan Frost recorded a hat trick in the first three minutes of the first half scoring on two spectacular headers off corner kicks.

Briarwood head coach Shawn Brower used the quick lead as an opportunity to get his second team some minutes in meaningful situations. Brower actually substituted the full eleven players each time as depth has improved from last year.

“We put a couple away early, but the goal tonight wasn’t to score 10 goals, it was will we be effective with how we want to play going forward and being efficient with our opportunities,” Brower said. “We weren’t very efficient in the first half.”

Despite scoring twice more before halftime, those goals came starters again as Frost scored his fourth goal of the half assisted on the fifth to fellow junior Hamilton Bowen.

Overall, however, the team put a stunning 15 of 25 shots on goal and could’ve come away with several more first-half goals. The Lions finished the game early with a furious rally in the second half scoring five goals in the final 10 minutes of the game—leaving 22 minutes of actual game clock to spare on the scoreboard.

Frost scored the last of his five goals in the 49th minute to put Briarwood up 8-0. Senior Griffin Felton also racked up a couple of goals late sending a scorcher from 30 yards away into the lower right corner of the net then added another three minutes later just inside the box to the right side.

“Logan can score goals, but he’s one of the most unselfish players on the team,” Brower said grinning. “He makes everyone around him better and I’ll sometimes have to tell him to actually look for the goal, because he’s normally our set up guy.”

The Lions set an incredible pace in the victory shooting a total of 43 times keeping 26 on goal. Holt did not record a single shot the entire game. Briarwood Christian will likely face Trinity Presbyterian in the second round and will do so on the road this coming Tuesday, May 1, at 7p.m.

By SETH HAGAN | For the Reporter NORTH SHELBY – When the night began just one victory separated the Briarwood... read more