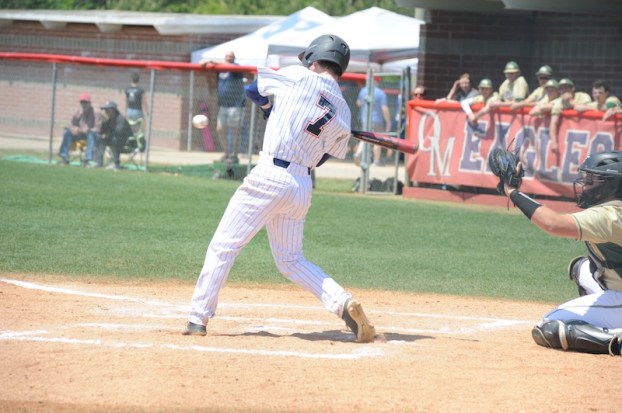 The Oak Mountain baseball team was eliminated from the playoffs after a first-round loss to Bob Jones. (File)

Oak Mountain eliminated in first round

MADISON – Twelve unanswered runs put an end to the Oak Mountain Eagles’ baseball season April 28, as Bob Jones rallied to rubber match of a three-game series, 12-5, and eliminate Oak Mountain in the first round of the AHSAA Class 7A playoffs.

Saturday’s result was nearly the reverse story of the Eagles’ 12-3 win in Game 1 after trailing 3-0 through three innings. Bob Jones evened the series in Game 2 on April 27, 5-1.
After leaving a pair of runners stranded in the top of the first inning of Game 3, the Eagles loaded the bases in the second inning with two walks and single by Luke Percer, who led OMHS with two hits. Caleb Kennedy drove in Oak Mountain’s first run on a ground out and then the Eagles scored two more on a passed ball and error to take a 3-0 lead and forcing a pitching change.

The Eagles’ bats came alive in the fourth inning. Percer delivered a one-out single, followed by a RBI double by Kennedy, a Dylan Fraser single and Caleb Ragland sac fly to extend the lead, 5-0. With two on and two outs, Landon Cato hit a deep fly ball to right center, but Dylan Ray made a diving catch to get relief pitcher Austin East out of a jam.

“If that gets down it’s 7-0, and who knows,” OM head coach Derek Irons said. “The first four innings we swung it really well. We knew they were a really, really good team offensively. They got going there in the bottom, and we just couldn’t get off the field. That ultimately is what did us in.”

Bob Jones leveled an eight-run blow in the bottom of the fourth inning after Oak Mountain starter Jackson Kimbrell held the Patriots to one hit and struck out six through the first three innings. Three singles, three walks and a pair of fielder’s choices racked up four runs for Bob Jones before Oak Mountain recorded an out in the fourth inning. Ray doubled in the tying and go-ahead run to make it 6-5. It was 8-5 before Colten Carver was caught stealing second to end the inning.

East shut down the Eagles in the final three innings, despite a pair of singles by Hurst and Heiberg to begin the fifth inning.

With Hunter Hall on the mound for Oak Mountain, Bob Jones added a pair of runs in the fifth on a RBI double by Ryan Crawford and RBI hit by Daly. The Patriots added one more in the sixth on a sac fly by Edge off Kade Sanders.

“We definitely had high expectations. Today is a bitter pill to swallow, but we try to step back and see the big picture,” Irons said. “These guys made the playoffs for the third consecutive season. This is the first time in school history that’s happened. We’ve averaged 30 wins the last three years, which says a lot about the consistency of this senior class and what they’ve brought to the table the last three years. I’m very grateful for what they’ve done.”

Pelham’s bid at repeat ends at hands of No. 1 Homewood in OT