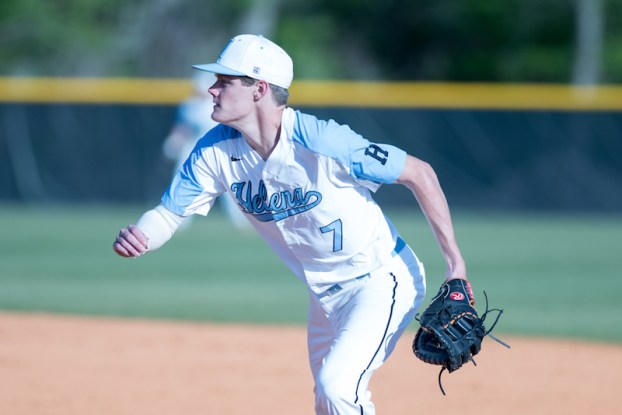 Fitts and Green dominate in second round sweep of Opelika

OPELIKA – In a matchup featuring the Huskies and Bulldogs, the Helena varsity baseball team got a huge sweep on the road by getting two shutouts in the second round of the AHSAA 6A state playoffs on Friday, April 27.

Here’s a recap of how Helena took down Opelika by scores of 4-0 and 1-0 to move onto the third round of the playoffs.

Helena got some early run support for Fitts in the top of the first inning thanks to a two-out RBI single from Colton Hood to give Helena a 1-0 lead, and in the end one run was enough as Fitts tossed a one-hitter to shut down the Bulldogs.

Fitts has been one of the anchors for the Helena pitching staff all season and against Opelika he once again showed why.

In seven innings of work, Fitts allowed just one hit and struck out nine Bulldogs on 99 pitches for the complete-game win. Fitts gave up the only hit to Opelika in the bottom of the first inning before settling in and pitching a gem.

Helena led just 1-0 entering the sixth inning but added insurance runs on an RBI single from Green to score Landon Leake and added two more runs an inning later on an error and a balk to take the 4-0 lead.

Opelika trailed 4-0 heading to the final inning as Fitts retired the Bulldogs in order on a fly out, strikeout and fly out to end the game.

Hood and Bell went 2-for-3 to lead Helena at the plate. Hood and Green finished with one RBI apiece.

In game two, runs were few and far between but in the end, Helena scored the only run that mattered in dramatic walk-off fashion to complete the sweep of Opelika.

On the heels of a complete game by Fitts in game one, Green matched Fitts’ performance by pitching a complete game of his own that included 10 strikeouts and just three hits allowed to get the win.

The Huskies offense finished with six hits in the game but struggled to plate runs as Helena left nine runners on base.

Following the single, Fitts was hit by a pitch, followed by a walk to Nick Ragsdale to load the bases for Helena. With no bases open, Opelika pitcher Micah Chrisitan had no place to put Hood as he stepped in the batter’s box.

Luckily for Helena, Hood was hit by a pitch with the bases loaded as Moss scored from third to win the game 1-0 on a walk-off hit by pitch.

With the sweep, Helena advances to the quarterfinals of the 6A playoffs where they will travel to Spanish Fort on Friday, May 4. Games one and two are scheduled for 5 p.m. and 7:30 p.m. with game three scheduled for Saturday, May 5, at noon if necessary.