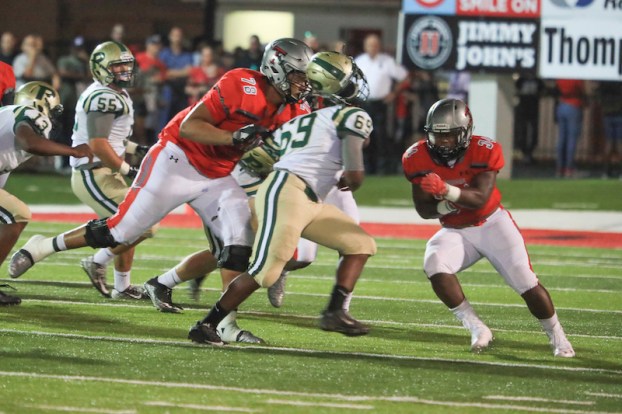 Thompson's Amari Kight, No. 78 above, committed to the University of Alabama on Sunday, April 29. He became the second THS player to commit to the Crimson Tide in the last week. (File)

ALABASTER – For the second week in a row, a Thompson Warriors football player committed to the University of Alabama over the weekend, and this time around it was one of the best 52 recruits in the country.

On Sunday, April 29, Thompson rising senior Amari Kight announced through a video on 247sports that he was committing to join Nick Saban and the Crimson Tide.

“It feels like that’s where I belong,” Kight said. “I connected with all of the coaches and the players down there. My goal is to win championships and get to the NFL.”

The duo combined to spark one of the best offenses in the state of Alabama last year as Tagovailoa and running backs Shad Byrd and Jojo Ford combined for more than 5,000 yards of offense, none of which would have been possible without the blocking of Kight, who all three of those players praised throughout the season.

“I can come in and compete for playing time and then hopefully be a first round pick,” Kight said. “Hearing that from one of the best coaches in college football (Saban), that meant a lot.”

Standing at 6-foot-7, 315 pounds, he had offers from 11 different SEC schools, including Georgia, who went after Kight hard, but Alabama always held a special place in his heart and kept him from leaving the state for the Bulldogs.

While he has his sight set on taking the next step, Kight will first look to bring the Warriors a state championship in 2018 as the offense returns Tagovailoa and Byrd in the backfield, while Jayme Simmons ads an extra offensive lineman that should make this year’s offense even more dynamic than the 2017 squad.

By NEAL WAGNER / Managing Editor ALABASTER – Thompson High School wrestler will be helping a collegiate program get its... read more