ALABASTER – An Alabaster man was recently taken into custody after he allegedly physically abused a child who was in his care.

Jan Bartos, 35, who lists an address on Carter Lane, was arrested on Saturday, April 27, and charged with two counts of willful abuse of a child younger than 18. 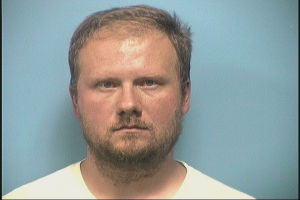 According to his arrest warrants, Bartos allegedly slammed a child’s head into a table before picking the child up and slamming them into a door between March 15 and March 16. The warrant stated that the child sustained a busted nose.

Willful abuse of a child younger than 18 is a Class C felony, which can carry a maximum sentence of 10 years in prison.

Bartos was booked into the Shelby County Jail, and released on bonds totaling $10,000 on the day of his arrest.

Bartos’ case was assigned to Shelby County District Court Judge Daniel A. Crowson Jr., and he is scheduled to appear in court for a preliminary hearing at 8:30 a.m. on May 23.