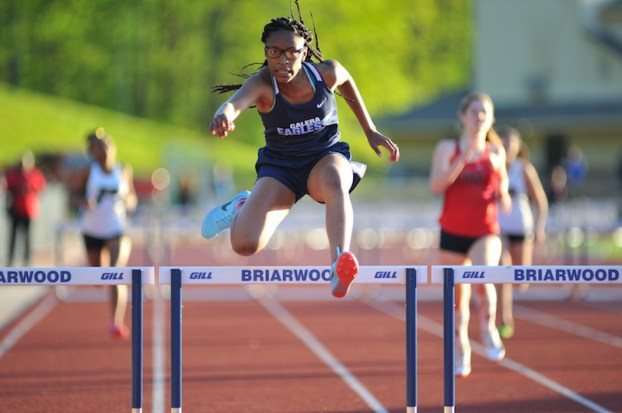 Calera's track and field team will be sending several athletes to the Class 5A state championship meet later this week. (For the Reporter/Larry Dancy)

It has been a strong season for the Briarwood track and field program and it continued at sectionals as several athletes cemented their spot at the state meet due to impressive showings, while the Calera Eagles also had several standout athletes earn a spot in the outdoor track and field finale that will be held at Gulf Shores Thursday through Saturday, May 3-5.

Below is a recap from both Calera’s and Briarwood’s impressive showing at their respective sectional meet.

Zach Howard and Trent Malloy had two of the strongest finishes at Briarwood’s sectional meet to secure a spot in the state meet.

Howard finished second in the 800-meter dash, while he and Malloy swept the top two spots in both the 1,600-meter run and the 3,200-meter run.

Outside of that showing by Howard and Malloy, several other BCS athletes in both boys and girls had strong top-five finishes starting with Jay Kynerd, who finished third in the 100-meter dash to advance to state in the event.

In the 400-meter dash, Jake Nunn ended with a second-place finish as a sophomore to qualify for state as well.

The Lions also had extremely strong success in the javelin throw as Ashton Domingue, Andrew Sherrod and Luke Hess took the top three spots in that order.

Nicholas Robson qualified in the 110-meter hurdles thanks to finishing second in the event.

Matthew McKenna qualified for state in the high jump after finishing fifth, which is the last of the automatic qualifying spots.

Riley Margene, an eighth grader, and Jaxen McPhail, a freshman, both qualified for the state meet in pole vaulting after finishing second and third, respectively.

Two athletes also qualified in the discus finals, as Dalton Brooks and Garrett Bell finished third and fourth, respectively, to advance. In the shot put finals, Bell had another strong showing and finished in second place with a distance of 45 feet 3.5 inches to qualify for his second event.

Moving over to the girls side of things, Morgan Hutchinson and Sophie Muir-Taylor, both seniors, qualified in the 400-meter dash after finishing third and fourth, respectively.

Three girls also qualified for the state meet in the 1,600-meter run after Cady McPhail and Hild finished in the top two spots, while Morgan Harris finished fifth.

That dominance continued into the 3,200-meter run where Hild, Adrienne Goolsby and Grace Lovell took the top three spots.

Musachia and Katie Kelley helped the Lions sweep the top two spots in another event, as they finished first and second, respectively, in the high jump.

Caroline Keller, a freshman at Briarwood, qualified in pole vaulting after finishing first in the event, while Kate Saunders, an eighth grader, finished second in the discus throw to advance.

Ellie Sherrod and Sage O’Brien rounded out the strong individual performances by Briarwood, as they finished third and fourth, respectively, in the javelin throw.

Several athletes for Calera stood out in the Eagles sectional meet as well, but none were as strong as Syncere Henderson, who had the team’s best finish of the day.

Cornelius Brown, the quarterback of the football team, also had a strong showing and qualified in multiple events. He finished fourth in both the high jump and the long jump to earn a spot at state in both events.

Phillip Douglas and Jacobi Gaines were the other two boys athletes to automatically qualify for a spot in the state meet. Gaines finished third in the 110-meter hurdles, while Douglas finished second in the shot put finals.

Ezekiel Wedgeworth and Chandler Smith each qualified as wildcards after Wedgeworth finished sixth in the 300-meter hurdles and Smith finished seventh in the triple jump.