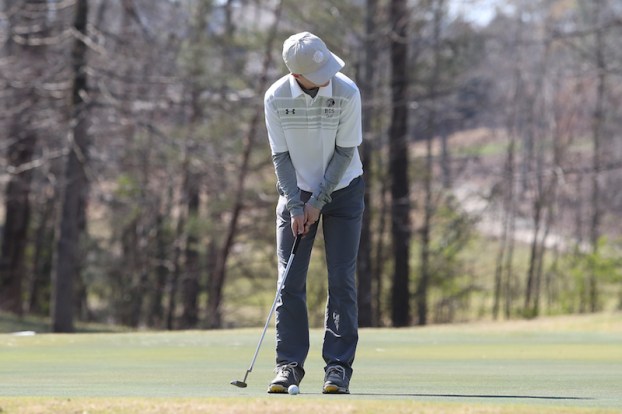 Briarwood boys golf team advanced to sub-state after winning its section championship on Monday, April 30. (For the Reporter/Dawn Harrison)

Briarwood and Helena have both produced some solid boys golf during the 2018 season and on Monday, April 30, the two teams sent both of their teams on to the next round of the postseason.

Thanks to the Lions winning their sectional title and the Huskies finishing inside the necessary top two of their sectional to advance, both will be on to the quarterfinal round of the playoffs, which is just one step away from competing in a state championship a week later.

It marked the second year in a row Briarwood has one its section championship after the Lions made a strong run to the state championship tournament during the 2017 season.

They eventually finished behind St. Paul’s Episcopal, who shot a 603 to beat runner-up Guntersville (644). That experience was invaluable, however, and has the team excited for another impressive postseason run.

That playoff run started in the sectional tournament held at Sylacauga Country Club, as Briarwood competed against teams like Calera and Shelby County.

Led by Slade McCraw with a 2-over par 74, the Lions were able to edge out Sylacauga for the section title with a total score of 308. The Aggies ended the tournament eight strokes behind Briarwood.

Drew Schroeder also had a nice round for the Lions firing a 4-over par 76 to finish just behind his teammate.

In a difficult section featuring teams such as Homewood, Chelsea, Pelham and many other top 6A programs, the Helena Huskies were also able to qualify for the sub-state tournament.

Competing at Timberline Golf Course in Calera, the Huskies finished with an aggregate score of 312, which was just narrowly behind Homewood’s total of 303 for the section championship.

While Helena didn’t win the title, they did finish in the necessary top two to advance on to the next round of the playoffs.

Briarwood will move on to compete at Dothan National Golf Club in their sub-state tournament on Monday, May 7.

The Huskies will also have travel a lengthy distance as they’ll compete at Timber Creek Golf Club in Spanish Fort on Monday, May 7.

With four teams competing at each sub-state tournament, the top two teams from each will advance, giving both Briarwood and Helena a 50/50 shot at moving on.