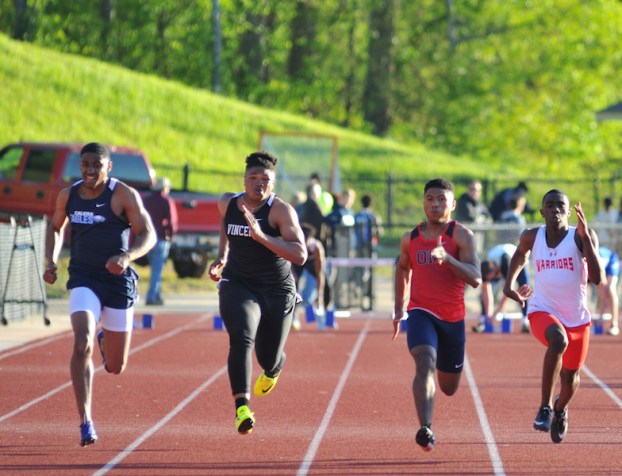 Vincent's track and field team will be sending several athletes to the 2018 Class 2A State Meet. (For the Reporter/Larry Dancy)

With the pressure of qualifying for state fully on the shoulders of all track and field athletes competing in sectional meets, Montevallo and Vincent handled it well as each team had several qualify for the state meet in Cullman Thursday through Saturday, May 4-5. Below is a recap of how each team fared at their respective sectional meet.

It was a strong sectional meet for the Vincent Yellow Jackets in both boys and girls events as each team hovered around the No. 2 spot for the duration of the meet.

Competing in the Class 2A, Section 2 meet, Vincent had 13 different athletes qualify to compete in at least one event at the state meet.

Several of those 13 qualified in multiple events starting with Kaerria Lykes, who finished fifth in the 400-meter dash, third in the 800-meter run and fifth in the long jump to qualify for all three events.

Tae McGregor had one of the strongest showings for the Yellow Jackets as he finished first in both the 100-meter dash and 200-meter dash to qualify.

The final individual male athlete to qualify for the state meet was Kaleb Wilson in the triple jump. He finished right on the qualifying number in fifth.

The biggest highlight for the Montevallo Bulldogs was TaVarius Holman, who finished first in the 100-meter dash to lock up his spot at the state meet. He was joined by Tyler Olds, who finished fifth in the same event to advance.

As a team, the 4X100-meter relay squad qualified, while Joseph Cardoza qualified in the long jump by finishing third.