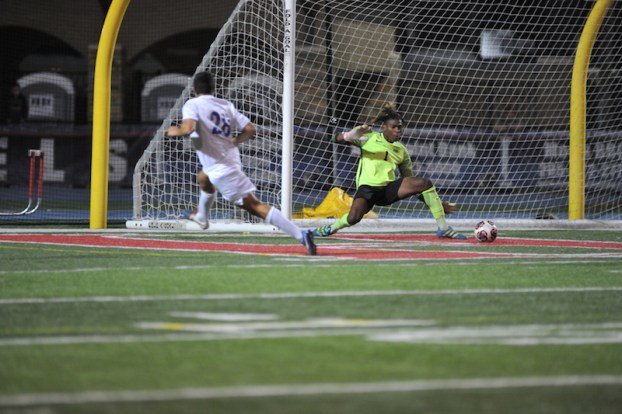 Oak Mountain’s boys soccer team fell to No. 2 Vestavia Hills in the first round of the Class 7A playoffs to end the Eagles chances at winning a fourth consecutive state championship. (For the Reporter/Larry Dancy)

Oak Mountain’s bid at 4-peat ends in first round against No. 2 Vestavia

VESTAVIA HILLS – For the first team in the 7A classification, there will be a boys soccer state champion not named Oak Mountain after the Vestavia Hills Rebels pulled off a 3-2 win on their home turf on Monday, April 20.

After a hard-fought game that saw Oak Mountain take the lead just before the half, Vestavia bounced back and scored the game-winning goal with 11:47 remaining in the contest.

The Rebels received a free kick from the far left side of the field from about 20 yards out and took advantage of the opportunity by sneaking the ball by Oak Mountain keeper Xzavier Brown, who had an incredible night.

With the goal, Vestavia Hills advanced to the quarterfinals of the playoffs, while Oak Mountain was eliminated to end its chance at a fourth straight state championship.

It’s been an up and down season for the Eagles where scoring was at a premium throughout, but they had won six of their last seven games coming into the first-round matchup with the Rebels.

While Oak Mountain was able to strike first, the offense struggled to maintain possession throughout the night forcing Brown to make several saves in the game to keep his team competitive.

Within the first 10 minutes of the game, Brown made four incredible saves in a row as the Rebels put a lot of early pressure on the junior.

Eventually all of that pressure became too much as the Rebels were able to beat the defense and capitalized on their fifth shot of the game to take a 1-0 lead with 31:18 left in the period.

Less than two minutes later, however, the Eagles earned a corner with 29:30 remaining in the first half. Patrick Guffey took the corner kick and placed it perfectly into a scrum of people just in front of the net.

Out of the scrum came Jackson Murphy right in front of the goal line, who proceeded to knock the ball in with ease to tie the game 1-1.

The game became much more defensive over the next 20 minutes with both teams getting a couple of decent looks.

With time in the half about to expire, Oak Mountain get its next best chance of the game. The ball was dribbled up the right-hand side of the field before it was eventually curved into the box for Wilson Rhodes.

After it bounced around a couple of times off of the keeper’s save, a Vestavia defender laid out to try and clear the ball away, but moved it just a few feet right of the goal where Wilson Rhodes was. Rhodes proceeded to bury a stinger across the turf and into the back of the net to give the Eagles a 2-1 lead at the half.

In the second half, however, it was a different story.

Vestavia came out on a mission and controlled possession of the ball virtually the entire half.

After a shoving match between the two teams forced Guffey and Murphy out of the game with yellow cards, the Rebels quickly capitalized with the game-tying goal with 28 minutes left in the game.

After continuing the strong pressure during the remainder of the half, Vestavia eventually earned the game-winning free kick after a Rebels’ player tripped over an Oak Mountain player who had just tripped as well.

It was an unfortunate turn of events for the three-time defending champ, but the Rebels capitalized to pull off the win to advance in the playoffs.