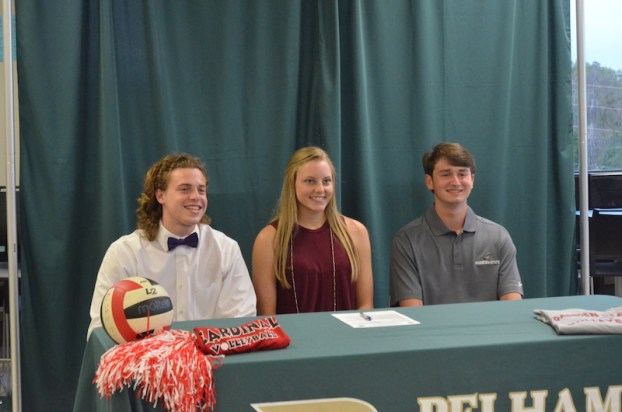 “I’m just so proud to stand before you guys and tell you that this young lady and these two young men have been model student athletes for Pelham High School and Pelham City Schools for a very long time,” PCS athletic director Kim Kiel said. “They’re great athletes, but they’re great students as well.”

Emorie Long began the ceremony by signing onto the Gadsden State University volleyball team. PHS volleyball coach Perry Robinson said Long “immediately made an impact,” when she first stepped on the court.

“She did great things on the court, and then we got to know her. She was a great person to be around. We always appreciated that,” Robinson said.

According to Robinson, Long has put a lot of work into improving her volleyball skills and is a quick learner.

“Coach Causey has the phrase of working while you wait, and Emorie certainly did that. She worked and worked and worked, and she did great things” Robinson said. “The other part that we loved is that we’d work on something with Emorie, and she’s quiet and she’s asking a couple questions. We’d go play, and what we’re working on, Emorie’s doing it.”

Despite being so quiet, Robinson said Long had a “competitive fire.” Robinson also said Long was a leader on the court and he is glad she was on his team.

“Honestly, it was fantastic to be there as her coach and see what she could do,” Robinson said.

Sloan Gartman, who is also set for Gadsden University, signed onto the school’s tennis team. PHS tennis team coach Clint Argo said Gartman was a hardworking, ambitious player and the only senior on the team.

“There were days when I was finishing up basketball and making my way late to tennis practice, I’d get down there, and Sloan has practice already started,” Argo said.

In his last season, Argo said Gartman outscored his opponents by 96 to 76, and won the majority of his matches. He currently holds 86 as his record and is the county’s runner up.

Argo also commended Gartman’s parents for their support of their son and their sportsmanship.

“We’re in a day and age where you don’t always see parents at matches or at games, with work schedules and everything going on. Without fail, his mom and dad were at every game,” Argo said.

Argo said he anticipates that Gartman will continue to do well at GSU, and wished him luck in his future endeavors.

“I wish him all the luck in the world at Gadsden State, and I hope he takes that mentality that he had here at Pelham to Gadsden State and helps their tennis team and makes them better,” Argo said.

“We had to kick him out of the gym. There were multiple times I told him, ‘Justin, get off of your legs, you’re not helping yourself right now,’ but he still wanted to work, because he wanted it that bad,” Floyd said.

Floyd said Allison has a goofy personality and was well-liked among teachers and students.

“Not only was he a great athlete and did great things, but he was leading the student section at volleyball games and out there at every baseball game with a megaphone. Umpires were trying to kick him out because he was out there yelling, ‘Hey, third baseman, your mom’s calling,’ and just saying crazy things,” Floyd said. “There’s nobody else at the game, it’s 30 degrees and Justin’s out there being his own student section. There hasn’t been anybody out there that’s been more of a Pelham panther than Justin Allison.”

Floyd said he expects Allison will do great things at Spring Hill and was honored to be his coach.

“Spring Hill has stolen a player in Justin, and I can promise you that Justin is going to be extremely successful there,” Floyd said.

Allison took a moment to speak, and thanked his God, his family, friends, teammates, coaches and the city of Pelham.

“This place gave me a home, and it’s going to be hard to say goodbye,” Allison said.

By ALEC ETHEREDGE | Sports Editor Briarwood and Helena have both produced some solid boys golf during the 2018 season... read more