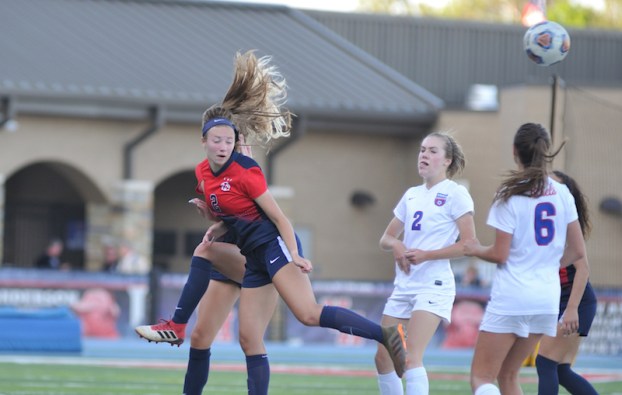 Oak Mountain's girls soccer season came to an end on Monday, April 30, after Vestavia Hills scored six unanswered goals to win by a final score of 7-3. (For the Reporter/Larry Dancy)

VESTAVIA HILLS – In a first-round playoff matchup that featured two top-four girls soccer teams that hadn’t given up more than two goals but three combined times this season broke out into an all-out scoring affair with a combined nine goals when Oak Mountain and Vestavia Hills met on Monday, April 30.

After the No. 6 ranked Eagles stormed out to a 3-1 lead quickly in the first half, the Rebels scored five unanswered goals – one in the first half and four in the second half – to pull off a comeback 6-3 win to eliminate Oak Mountain from the Class 7A playoffs.

The game got off to a torrid start in the first few minutes, as both teams put goals on the board in the first four minutes of action.

Before a goal was ever scored, however, something much bigger happened as Oak Mountain goalkeeper Olivia Schou collided with a Vestavia player and was forced from the game.

Shortly after that tough injury, Oak Mountain responded with the first goal of the game thanks to a cross from Hailey Whitaker to seventh grader Kierson McDonald, who put the Eagles on top 1-0.

Vestavia Hills answered back with a goal of its own less than a minute later to quickly tie the game up at 1-1.

For the next 25 minutes of the half, Oak Mountain seemingly took control of the game with goals from Danielle Retief and Bentley Stroupe to grab a 3-1 advantage with slightly more than 10 minutes left in the period.

The Rebels ended up responding with a big momentum goal with 10 minutes left until halftime to get within one goal at 3-2 heading to the break.

Coming into the game, Vestavia had given up more than one goal just twice during the regular season in 22 games and lost both, putting them in a difficult spot at the break.

The Eagles, on the other hand, had yet to lose a game when scoring three or more goals, but had played to a 3-3 tie and a 4-4 tie.

In the second half, both of those stats became irrelevant as the Vestavia offense continued to beat Oak Mountain’s back line of defense.

That goal seemed to take all of the pressure off of the Rebels as they played much looser and confident for the remainder of the game.

Less than five minutes after Hauberg’s goal, Caroline Causey beat the Eagles’ defense and sprinted up field for a one-on-one situation where she put the ball easily past the Oak Mountain goalkeeper to give the Rebels a 4-3 advantage.

A game that the Eagles led 3-1 at one point late in the first half had all of a sudden seen them lose the lead in 22 minutes of game play.

Vestavia went on to score three more goals down the stretch to bring its total to six unanswered goals, five of which came in the second half.

It marked the end of a difficult Oak Mountain season that saw senior leader Julia Pack go down with a heartbreaking injury during the regular season and Schou go out early in their first-round matchup.