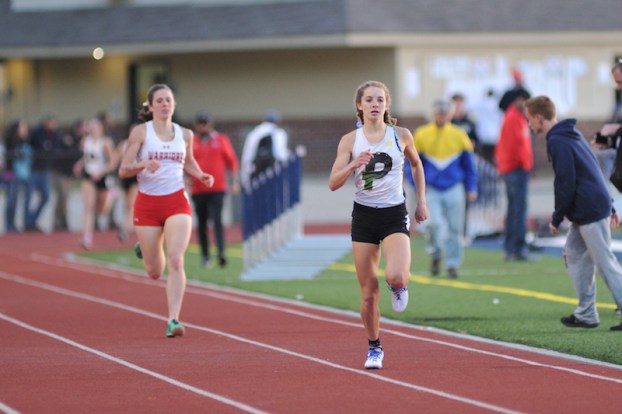 Pelham's track and field team is on a roll this season and looking to bring home several state championships. (For the Reporter/Larry Dancy)

It’s been a state championship type of season for several track and field athletes at Helena and Pelham, as well as Chelsea’s Teanna Cason, and during their respective sectional meets, none disappointed as they sealed spots at the state championship meet Thursday through Saturday, May 3-5. A recap from each team’s performance at sectionals is below.

In the 3,200-meter race, Vaughn will be joined by sophomore Talon Pritchard, who qualified with a wildcard finish of seventh in the event.

One of the strongest events for the Huskies came in the boys high jump finals where Hyde, Justin Stuckey and T.J. Funches all qualified. Hyde and Stuckey finished third and fourth, respectively, to automatically qualify, while Funches finished sixth to grab a wildcard spot.

Jake Knight and Bay Marks were the final two boys’ athletes to clinch a spot at the state meet. Knight finished fifth in the pole vault finals, while Marks was fourth in the javelin throw.

Despite finishing ninth among the 200-meter dash contestants in her sectional, eight grader Brooklynn Kirksey qualified for a spot at state as she was the final of four wildcards to qualify with no other section able to beat her time of 26.66.

That started the girls’ qualifiers off with some excitement, and it was one of just two events for Kirksey to qualify in as she also finished fifth in the 400-meter dash.

Tanner also finished fifth in the triple jump to advance in two different events. Victoria Brown finished just three spots behind Gardner in the discus throw, as she took fourth to advance to the state meet as well.

Helena’s final event to see anyone qualify for state was the shot put finals, where Gardner finished second and Erin Fuller finished fourth to both automatically qualify.

Adam Keller had one of the strongest showings of any athlete at the sectional meet, as he finished second in the 800-meter run, the 1,600-meter run and the 3,200-meter run to qualify for a spot at the state meet in each event.

While Keller’s finishes were strong, Dorian Tolbert was the only boys athlete for Pelham to finish first. He took the top spot in the discus throw to easily qualify for state.

In one of the closer state qualifying competitions, Elijah Shoemaker was also able to qualify in the discus throw after taking the fourth of four wildcard spots.

Mason Goolsby qualified by finishing second in the high jump.

The girls team has been dominant for Pelham all season and continued to show why at the sectional meet starting in the 800-meter run where Katie Strozier, Alex Wilkins and Madilyn Dubose all finished in the top three to sweep the podium.

Bass also went on to claim the second-place spot in the 3,200-meter run to qualify in two different events.

In the 300-meter hurdles, the Panthers saw two more athletes qualify for state, as Anna Wilkes, a sophomore, and Zhaniyah Rudolph, a freshman, finished third and fifth, respectively.

When it came to the field events, several of Pelham’s usuals stood out as they have throughout the season.

In the high jump, Erin Long and Dunia Perez both qualified for a spot after finishing second and fourth, respectively.

Long qualified for her second event after finishing third in the long jump, which was one spot behind Sarah Guthrie who also qualified.

In the javelin throw, both Long sisters qualified for state to cap off an incredible year by both, as they tend to be one and two in the event more times than not. Erin finished first in the event, while Emorie Long finished one spot behind in second.

Ayala Seaborn closed out the strong event for Pelham after qualifying in shot with a finish of third.

The boys 4X800-meter relay team finished sixth and picked up a wildcard spot.

Fitts and Green dominate in second round sweep of Opelika

By GRAHAM BROOKS / Staff Writer OPELIKA – In a matchup featuring the Huskies and Bulldogs, the Helena varsity baseball... read more