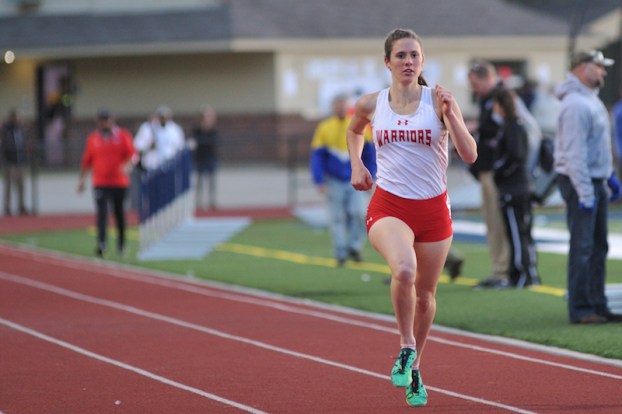 Thompson's McKenzie Hogue will head to the state track and field meet with a strong chance to win all three of the distance races. (For the Reporter/Larry Dancy)

MOUNTAIN BROOK – It’s been an extremely impressive season for the Thompson, Oak Mountain and Spain Park outdoor track and field teams, but all three compete in the same difficult area that makes finding a spot at the state meet a tall task.

All three, along with teams such as Hoover, Mountain Brook and Vestavia Hills, competed in the Class 7A, Section 3 tournament at Mountain Brook April 27-28. Below is a recap of each team’s performance with athletes that qualified for the state meet.

Samuel Holmes qualified for a spot at the state meet in the 200-meter dash after finishing in fourth, but to show how difficult the 7A classification is, Van Smitherman and Antonio Brown finished seventh and eighth, respectively, but missed out on advancing by less than a second.

Holmes went on to finish second in the 400-meter dash to qualify in two events, and was joined by Alondae Vassar, who finished third in the event, and Smitherman, who finished fifth in the event to redeem the heartbreaking finish in the 200 meter.

In the 800-meter run, Thomas Cousins automatically qualified for a spot with a finish of fourth place, while Jace Jones finished in sixth to grab a wildcard spot.

Jones also qualified to compete in the 1,600-meter run after finishing fifth in the race, while Brandon DeMarcus Lee finished seventh and grabbed a wildcard spot in the event.

Cameron Childs and Timothy Osborne both advanced in the 110-meter hurdles despite missing out on an automatic qualifying spot. Childs finished sixth, while Osborne finished in seventh, but both were fast enough for a wildcard spot.

Osborne also went on to finish third in the 300-meter hurdles, which earned him a spot in two state meet events.

Phillip Lewis advanced to the state meet automatically thanks to his third-place finish in the high jump. Jared Hurst also qualified in the event thanks to his height of 6 feet 2 inches.

Lewis went on to advance to the state meet in the triple jump as well thanks to his finish of sixth, while teammate Julian Woods finished one spot ahead of him to advance as well.

In the pole vault finals, Dominique Hall and Blake Ellis, both freshmen, advanced with finishes of third and fourth, respectively.

Viktor Turek was one of two boys athletes to win an event, as he finished first in the discus throw. The other winner was Steve Villegas, who took home first place in the shot put finals. He finished just ahead of Turek in fourth, as he qualified for another event as well.

The Thompson girls continued their dominant season with several qualifiers as well.

In the 100-meter dash, Zakiria Holifield won, while Alandria McCurdy finished in second and Niya Oden finished in fifth to all qualify for the state meet.

Holifield and McCurdy also advanced in the 200-meter dash after finishing second and third, respectively, while Alayah King finished in fifth to advance as well.

In the distance runs, McKenzie Hogue continued to impress. She finished first in the 1,600-meter run and the 3,200-meter run, as well as third in the 800-meter run to advance to state in all three where she has a solid chance to win a championship.

Between the high jump and the long jump finals, Thompson had three athletes advance to state led by London Wooley. Wooley ended up winning the high jump event, while Julianne Knight finished in fourth. Oden advanced in her second event after finishing in fourth in the long jump.

Oden made it three events shortly after thanks to a first-place finish in the triple jump, while Alayah King (fourth) and Tyara Irvin (sixth) also advanced.

In pole vaulting, Elizabeth Sutton advanced after finishing seventh in the sectional event.

Thompson’s dominant performance continued in the discus finals as Ebony Butler and Olivia Coleman both finished inside the top five to advance.

Miller just missed out on the discus throw, but she finished third in the javelin throw and the shot put to advance to state in each of those two events. Butler joined her in the shot put after finishing fourth in the event.

Aaron Brooks took third in the 100-meter dash and the 200-meter dash to advance to the state meet in both events for the Eagles.

Bryce Keefover was also able to narrowly advance to the state meet in the 3,200-meter run after finishing eighth to pick up a wildcard spot.

In the 110-meter hurdles, Indy Chery was able to advance thanks to his fifth-place finish after improving from eighth in the prelims. Noah Brown went on to advance in the 300-meter hurdles thanks to a finish of sixth, which led to a wildcard position for the junior.

Trey Allen had one of Oak Mountain’s best performances in the high jump where he finished second in the section.

Harrison Dimick and Clay Marty each advanced to state as well thanks to third place finishes in the discus throw and javelin throw, respectively. Dimick also went on to qualify in shot put after finishing fifth in that event.

Nicole Payne continued to lead the state in two of the three sprint events, as she finished first in both the 200-meter dash and the 400-meter dash.

In the 100-meter dash, Halla Stallworth and Grace Campbell both qualified for the state meet. Stallworth finished fourth, while Campbell finished in sixth.

Evie Bell qualified in the 800-meter run thanks to grabbing the fourth of four wildcard spots after finishing ninth in the event. Bell went on to finish fourth in the 1,600-meter race to advance to state in two different events.

The last two individual girl athletes to advance for Oak Mountain were Olivia Hood and Phoebe Cooper. Hood finished fifth in the javelin throw, while Cooper finished eighth in the same event.

The Eagles were able to qualify all three of the girls’ relay teams finishing first in the 4X400-meter race, second in the 4X100-meter race and fifth in the 4X800-meter race.

Jacob Warner was the lone runner to advance for the Spain Park boys as he finished fourth in the 3,200-meter run to qualify for state.

Several others advanced in different events starting with Will McCrite in the triple jump. He finished in seventh to grab a wildcard spot.

Steven Pate and Jake Pughsley both advanced for the Jaguars in the discus throw. Pughsley also advanced in the shot put by finishing in third, while teammates Matthew Gray (second) and Zac Shaw (sixth) advanced as well.

Josh Wallace was the final boys’ athlete to advance after one of the team’s strongest finishes. He finished in second in the javelin throw.

Katelyn McClure won the discus throw and finished sixth in the javelin throw to advance in both.

MacKenzie Cullpepper was the biggest highlight for the team in either boys or girls events. She advanced to the state meet in the 800-meter run, the 1,600-meter run and the 3,200-meter run.

Sydney Taylor also advanced to state thanks to a finish of third in girls 100-meter dash.

Makenna Kuhn was the final Spain Park athlete to advance to the state meet after finishing in fifth in the pole vaulting finals.