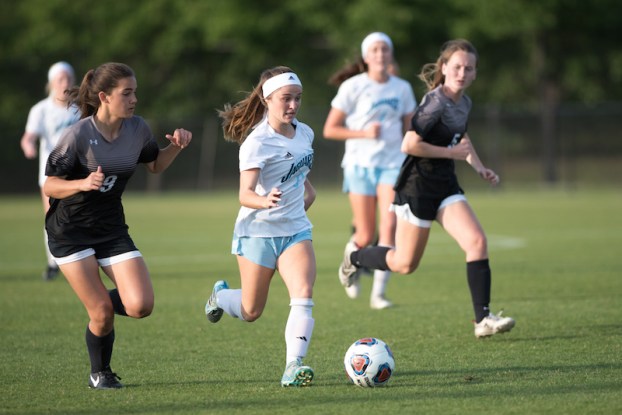 Spain Park's Haley Greene ended up with five goals to lead the Jags to a 6-1 victory against Thompson in the first round of the playoffs. (Reporter photo/Keith McCoy)

HOOVER – What has been an unbelievable season for the Spain Park girls soccer team is continuing to get better and better, as the Jaguars took down Thompson 6-1 on Tuesday, May 1, in front of a home crowd to advance to the quarterfinals of the Class 7A playoffs and move within a win of the Final Four.

Spain Park has been on a roll down the stretch of the season winning four games in a row and nine of its last 11 games coming into the playoffs to gain a load of momentum.

That momentous run has been sparked in large part by junior Haley Greene, as well as fellow junior Jasmine Greene.

In the first round of the playoffs, it was Haley Green’s turn, as she continued putting up goals like it was nothing scoring five times in the game, including four in the first half and a hat trick within the first 17 minutes of the game to propel the Jags to an easy 6-1 win against the Warriors.

It didn’t take long for Haley to put her second goal of the game in the back of the net as she fired one from just outside of the box and placed it perfectly in goal for a 3-0 advantage.

Less than a minute later is when she scored her hat trick goal to put Spain Park up 4-0 with just more than 23 minutes to play in the half.

With it already being a successful enough first half for Haley, she could have stopped there and would have been fine and the Jags would have still likely won, but she was nowhere near done.

After 10 minutes had passed with no goal, Haley stepped up and posted her fourth of the half to put Spain Park up 5-0 at the halftime break.

With Spain Park having given up more than two goals just twice this season in 21 games, the lead seemed pretty safe with Vivian Gray in goal.

Haley went on to add her fifth goal of the game midway through the second period after running the length of the field before burying the goal to put Spain Park up 6-0.

Thompson answered with one late goal to make the final score 6-1, but Spain Park dominated in all facets of the game from start to finish.

With the win, the Jaguars advanced to the quarterfinals of the playoffs where they will travel to take on 13-3-2 James Clemens.