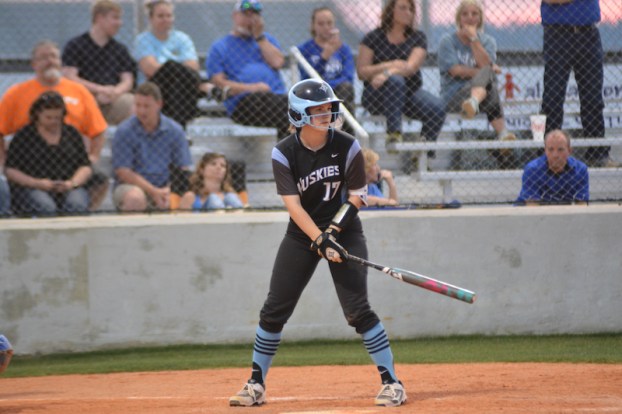 Megan Fortson finished with two RBIs for Helena in the Huskies 5-4 win over Chelsea in the Class 6A Area 8 tournament on May 1. (Reporter Photo/Graham Brooks)

HELENA–The Helena Huskies softball team has earned another trip to the Class 6A Regional tournament beginning May 10, thanks to clinching at least a runner-up finish in the Class 6A Area 8 tournament on Tuesday, May 1.

In game one, Chelsea took care of Pelham by a score of 5-0 to advance to the winner’s bracket where they faced Helena in game two.

The Huskies would jump out to an early 5-1 lead but had to fend off a late comeback by the Hornets to preserve the 5-4 win.

Things got started in the second inning as Chelsea got on the scoreboard first thanks to an RBI-double to make it 1-0 Hornets.

In the bottom part of the frame Helena scored three runs all with two outs to quickly regain the lead. A walk and a single by Kaysi Bargman put runners at first and second that set up a two-RBI double for Megan Fortson to give Helena a 2-1 lead. One batter later Jamie Gregg hit an RBI-single to extend the lead to 3-1.

Helena’s final two runs came in the bottom of the third inning on a two-RBI single from Tori White to score Grace Robertson and Katie Lively to make it 5-1.

Helena starting pitcher Avery Barnett pitched well in the first five innings but ran into some trouble in the top of the sixth inning.

Trailing by four, Chelsea quickly needed some runs and were given a spark when a two-run home run left the bat of Brooke Burback to make it a 5-3 game. Two errors by Helena in the inning led to another run for Chelsea but a fly out ended the sixth inning with Helena still holding a 5-4 lead.

In the final inning, Barnett would retire the side in order as Helena won 5-4.

Barnett pitched a complete game in the circle and struck out four while allowing three earned runs.

At the plate, White and Fortson both finished with two RBIs a piece for Helena.

Helena will now play the winner of Chelsea-Pelham on Thursday, May 3.

By ALEC ETHEREDGE | Sports Editor Briarwood and Helena have both produced some solid boys golf during the 2018 season... read more