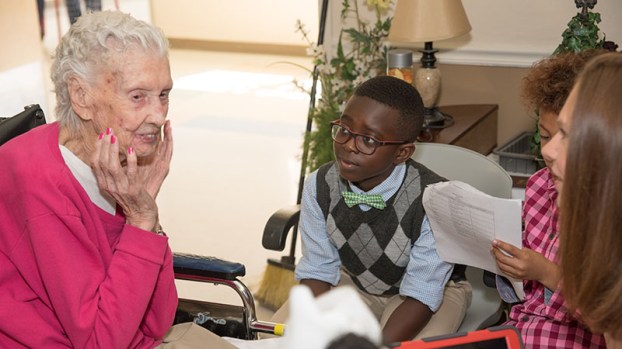 “My mother made lemonade, and all the kids came and got some for my sweet 16,” Duke, a resident at Alabaster’s Shelby Ridge and Rehab Select nursing home, told a group of Thompson Intermediate School students on the morning of May 2. “We had fun. There were five of us kids, and we had a good time.”

Duke will celebrate her 106th birthday on July 13, but the interviews with the TIS students allowed her to relive good memories of her youth, such as helping her father chop enough firewood at a time to stockpile for the entire winter.

Across the room, Shelby Ridge resident Dorothy Brown, who was born in 1955, shared memories of growing up with her three brothers and two sisters.

“We lived in a double-wide trailer. It was nice and I loved it. It was a nice neighborhood I was in,” Brown said.

Though separated by a few generations from the 10-year-old children who were interviewing her, Brown shared at least one thing with the TIS students: She attended school in Alabaster and graduated from Thompson High School.

The event was made possible through a partnership between TIS and local real estate agent Tami Pickett with Keller Williams Realty Metro South, and sought to give the students a real-world perspective of the events they’ve learned about in their social studies and Alabama history classes.

“We wanted to teach them about oral history, because it’s such a lost art,” said TIS fourth-grade teacher Amber Broadhead, noting 83 students made the trip to Shelby Ridge “By interviewing the residents here, they are learning living history that may have been lost.”

In the weeks leading up to the event, the students split into groups and researched the lives of the Shelby Ridge resident they were paired with. The students prepared questions for the residents, and recorded their answers in preparation to tell their stories to their classmates in the coming weeks.