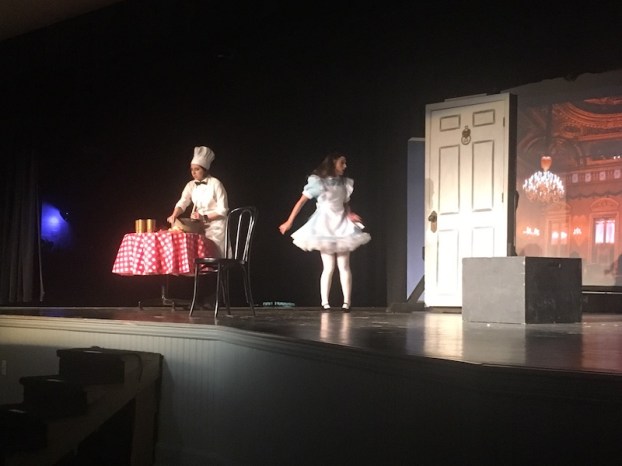 The SCHS theater department recently finished its run of "Alice in Wonderland," which was based on the novel by Lewis Carroll. (Reporter photo/Amalia Kortright)

COLUMBIANA – The Shelby County High School theater program premiered its performance of “Alice in Wonderland” on Thursday, April 26. The show, which ran until April 29, was based on the novel by Lewis Carroll, according to director and theater teacher Kathryn Myrick.

Myrick said this is the third time SCHS has performed “Alice in Wonderland,” because it allows for a large and diverse array of cast members.

On top of the regular weekend shows, Myrick said the cast performed several shows during school hours. Overall, she said a total of 10 shows were performed.

“It’s a lot, and there aren’t many theater departments that do this, but I want my students to experience what it’s like for actors who do two to three runs a day,” Myrick said. “It gives them a taste of what real life theater is like. They did enough shows that it hit like two weeks.”

Senior Sarah Head, who played Alice, said this is the second time she has been cast as the lead in a play at SCHS. She previously played Belle in the SCHS performance of “Beauty and the Beast,” and started out as a munchkin and a poppy in the school’s performance of “The Wizard of Oz.”

“I started from the bottom,” Head said.

While “Beauty and the Beast” and “Alice in Wonderland” were very different, Head said she enjoyed participating in both.

“It’s so different, having two different leads,” Head said. “The rest of the cast really helped me through the whole thing.”

Because she does not plan to act in any plays in college, Head said her last performance at SCHS was bittersweet.

“I feel like I’m going out with a bang,” Head said.

Head also encouraged any SCHS students who are interested in the theater department to get involved.