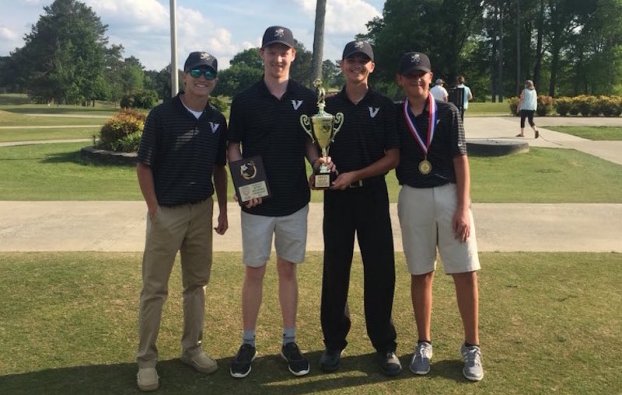 The Vincent boys golf team won the 2018 section championship in just its second year as a program. With the win, the Yellow Jackets advanced to sub-state. (Contributed)

CULLMAN – In just its second year with a golf team, the Vincent Yellow Jackets won the Class 1A-2A, Section 2 Championship thanks to strong and consistent play from four different golfers at Cullman’s Cross Creek Golf Course on Tuesday, May 1.

Brooks McKeller, Dusty Davis, Nathan Fernandez and Cole Fincher all posted consistent and strong scores to shoot a team total of 348 in the section tournament, which was good enough to win the title and lock up a spot in the Sub-State tournament.

“It’s been a great experience starting the team and watching them get better as a group,” head coach Wiley McKeller said.

It wasn’t just a strong team performance from the Yellow Jackets, but Davis and McKeller ended up shooting the two lowest scores at the tournament as well.

McKeller, a freshman, fired a 4-over par 76 to take home the low medalist honor, while Davis, a sophomore, shot a 12-over par 84 to finish second in the section tournament. Fernandez and Fincher weren’t far behind at all as the two seniors on the team both shot rounds of 89 for the team total of 348.

Vincent took down 14 other teams in the tournament to come out on top and advance in the postseason.

The Yellow Jackets couldn’t have asked to get off to a better start in the sport of golf after just one year previously under their belts, but McKeller said it wouldn’t have been possible without the help of their home course.

“Alpine Bay is our home course and they’ve been instrumental in our development,” McKeller said. “It’s a Robert Trent Jones designed course that a lot of people don’t know about. Owner Tony Parton and head pro Shawn Reider have been really good to us in getting this thing off the ground.

Alpine Bay is located just 14 minutes from Vincent Middle High School and sits just south of the Coosa River making it a convenient home course for the Yellow Jackets and one that can offer ample practice opportunity.

Vincent’s sub-state tournament will be held at Heron Lakes in Mobile on Tuesday, May 8, where they will compete against some extremely talented teams all looking to advance to the state tournament.

By ALEC ETHEREDGE | Sports Editor With the pressure of qualifying for state fully on the shoulders of all track... read more