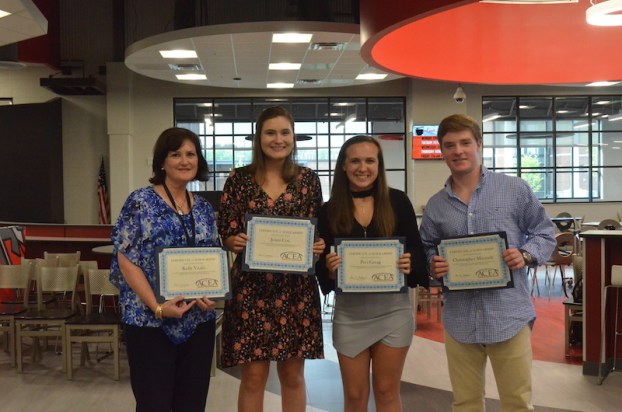 THS students Jenni Cox, Peri Gregg and Christopher Miranda, along with TIS teacher Kelly Vaziri, were presented with scholarships from the ACEA. TMS teacher Frankie Grice, who also received a scholarship, was not present at the ceremony. (Reporter photo/Amalia Kortright)

ALABASTER – Three Thompson High School Seniors and two Alabaster City Schools Teachers were recently awarded $1,000 in scholarships by the Alabaster City Education Association at a ceremony at 4:30 on Tuesday, May 1.

“It’s an honor to be able to present $5,000 in scholarships to students and teachers who are furthering their education,” ACES President Ava Andrews said.

Andrews said the scholarships benefit members of the ACEA and their children each year and are based on submitted essays.

As far as she knows, Andrews said the ACEA is one of the only teachers’ associations that gives scholarships to its adult educators.

“It’s one of our member benefits,” Andrews said. “They pay dues to us, so we want to give back to them.”

Marlowe said the states $6.6 billion is the best it has been since 2008, and all K-14 employees should expect a 2.5 percent raise in their October paychecks.