ALABASTER – Four suspects are behind bars, and several firearms and a significant amount of ammunition were confiscated on May 2 after the Shelby County Drug Enforcement Task Force, with the assistance of the Shelby County Multijurisdictional Tactical Response Unit, executed a search warrant in the 100 block of Eighth Avenue Southwest in Alabaster.

Lt. Clay Hammac, Commander of the Shelby County Drug Enforcement Task Force said he credits the success of this case to the hard work and determination of narcotics investigators during this seven-month investigation utilizing undercover operations and confidential resources. Mullins was found to be in possession of multiple assault rifles, as well as assorted firearms and munitions during the course of illegal drug sales.

“Our goal is to put drug dealers in prison for a long time,” Hammac said. “Fortunately, our narcotics investigators have worked tirelessly to remove another threat from our community.” 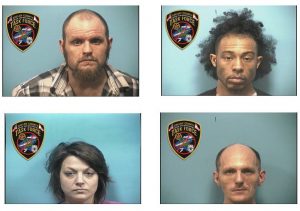 Clockwise from top, Adam Mullins, Brandon Chambers, Ashlyn Johnson and Clinton Self were arrested on May 2 in a Shelby County Drug Enforcement Task Force bust. (Contributed)

CHELSEA– Two members of Ambassador Girl Scout Troup 175 were recognized by the city of Chelsea for completing their Gold Award... read more