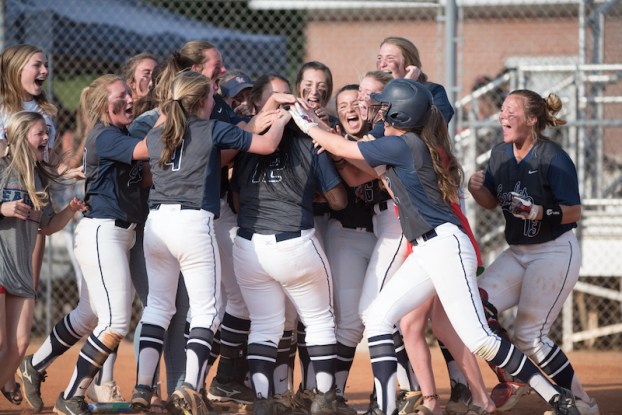 With a 20-0 win against Huffman and a 4-3 win against Spain Park, the Oak Mountain softball team clinched a spot in the Regional tournament on Thursday, May 10. (Reporter photo/Keith McCoy)

Oak Mountain is headed to Regionals

NORTH SHELBY – Despite two consecutive losses to Spain Park to miss out on the area tournament championship on Wednesday, May 2, the Oak Mountain Eagles are still Regional bound after a strong performance in the tournament held on their home turf.

The Eagles won the right to host the area tournament thanks to a 1-0 victory against Spain Park in the final area game of the season, followed by winning a coin flip to become the area champion.

Oak Mountain started out the tournament with an easy 20-0 victory against Huffman thanks to a 17 run second inning to end the game in a shortened three innings.

That opening-game win put the Eagles one win away from clinching a berth in Regionals, something they wouldn’t have to wait long for thanks to another impressive one-run win against their rivals.

After playing three games against Spain Park during regular season, all of which were tightly contested one-run battles, the two knew what to expect when squaring off against one another.

During those regular season matchups, the Eagles won two of the three games to hold the series edge. The fourth time around, they extended that series lead after picking up a 4-3 win to clinch a spot in Regionals on Thursday, May 10, in Tuscaloosa.

Oak Mountain got off to a strong start in the game. After a 1-2-3 inning in the top of the third, the Eagles came to the plate and scored in a hurry. Maddie Katona reached base on an error in one pitch. That was followed by a double from Jenna Galloway in just two pitches as she drove the game’s first run across the plate for a 1-0 lead.

Spain Park, however, answered quickly with two runs in the top of the second inning one of which came on an error and the other on a ground out.

There wasn’t much in the way of offense for the remainder of the game, but two swings of the bat made the difference in the outcome.

In the bottom of the fourth, Katona reached on a walk and three batters later with Oak Mountain still trailing 2-1 and two outs on the board, Cassady Greenwood drove a ball deep to dead away center field that cleared the fence for a two-run home run to give the Eagles a 3-2 lead.

Two pitches later, M’Kiyah Mitchell replicated that exact same at bat and blasted one over the center field wall as well for back-to-back homers to give Oak Mountain a 4-2 lead.

Spain Park went on to put nine base runners on the remainder of the game, but the only other run came when Alexis Anderson blasted a home run of her own over the fence for the Jags, but it wasn’t enough to overtake the Eagles.

While the Jaguars came out of the loser’s bracket to eventually win three games in a row, including another one-run win and a two-run win against the Eagles, Oak Mountain had already advanced to Regionals with its two wins, which keeps the ultimate goal of a state championship still a realistic goal.