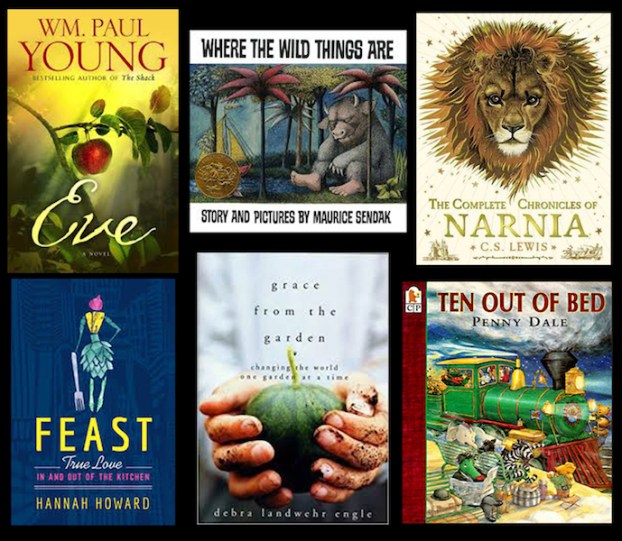 Recently on a visit to Jane B. Holmes Public Library, my attention was grabbed by a book on the new arrivals shelf.

Written by Wm. Paul Young, author of The Shack, the cover of Eve glowed and beckoned me closer. Which book covers instill that magic within others is the thought that came into my mind.

A book cover that spoke to Jan Holliday is Feast: True Love in and out of the Kitchen by Hannah Howard.

Howard, a writer and food expert who spent her formative years in New York eating, drinking, serving, bartending, cooking on a hot line and flipping giant wheels of cheese, weaves her complicated relationship with the food world both as a writer in the food community and someone who struggles with an eating disorder.

“Many male chefs have an ego and an attitude of ‘I’m in charge and I can take what I want,’” Howard wrote. (A podcast interview with Hannah Howard is available online.)

“So many books I read because I already know the author’s style or characters and if it’s a new one I want it no matter the cover,” Karen Taylor said.

“One book I bought years ago and still love is Grace From the Garden…changing the world one garden at a time by Debra Engle. The cover shows dirty hands holding a small melon.”

The Mists of Avalon is Anne Belue’s choice. This classic by Marion Zimmer Bradley written in 1983 was adapted as a television miniseries in 2001 with characters from the mythical Camelot—King Arthur, Gwenhwyfar. Lancelot, Merlin and Mordred.

Tracy Arnold at the Jane B. Holmes Public Library chose The Chronicles of Narnia by C.S. Lewis.

“The cover of the hardback edition of the Complete Chronicles of Narnia inspires me because it always makes me think of the religious symbolism behind the story. The cover is bright and attractive with the face of a lion.”

Sherri Fuchs, also at JHPL, chose Ten out of Bed by Penny Dale as one of her favorite book covers.

“I love the vibrant colors and how the characters are so happy and playful. It makes bed time look like so much fun and reminds me of how vivid our imaginations can be when we are kids.”

Jane B. Holmes Public Library Director Dan Dearing recalls Where The Wild Things Are by Maurice Sendak as a cover that he loves. “My family read this book to us as children, so it brings back lots of memories. It has a very distinctive style and many children still check it out today.

“You can,” Dearing adds, “As well, stop by the library soon to see some truly remarkable covers.”

By LAURA BROOKHART / Community Columnist A group of some 17 loyal and enthusiastic members of the Helena Beautification Committee... read more