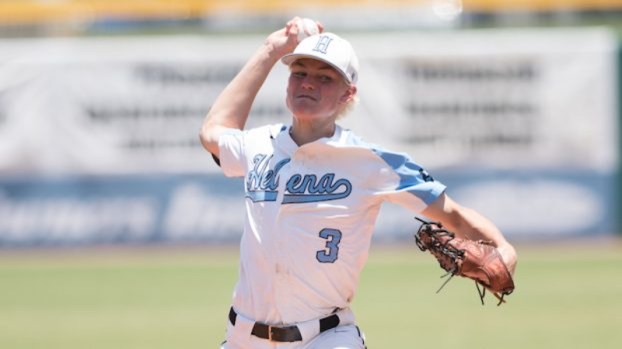 Helena’s Landon Green allowed just two hits and struck out 10 on just 86 pitches to earn a complete game shutout against Spanish Fort on Friday, May 4. (File)

Taming the bull: Helena baseball downs Spanish Fort to advance to 6A semifinals

SPANISH FORT–For the second straight weekend, Helena starting pitchers Richard Fitts and Landon Green each threw a complete game on Friday, May 4, as the Huskies swept Spanish Fort by scores of 9-3 and 6-0 to advance one step closer to their goal of repeating as Class 6A state champions.

This also marked the second straight weekend Helena won a playoff series away from home as they will now advance to the semifinals of the 6A baseball state playoffs.

Below are recaps of how Helena fared in each game against Spanish Fort in the quarterfinal round.

After both teams put a run on the board in the first inning, Helena’s offense exploded in the top of the second inning for seven runs in a lead they would not relinquish.

A single and a walk got the inning started for Helena but Spanish Fort starting pitcher Jackson Rogers seemed as though he may get out of the jam by retiring the next two Husky batters on a strike out and a line out to record two outs in the inning.

However, Helena was just getting started in the inning as a walk and a wild pitch allowed Luke Stamba to score from third giving Helena the 2-1 lead.

With the bases still loaded, Helena’s John Stephen Heacock stepped to the plate and roped a double to right field to clear the bases and give the Huskies a 5-1 lead.

This ignited a rally that led to three straight RBIs as Colton Hood and Stamba hit RBI doubles, while Green chipped in with an RBI single to give Helena the 8-1 lead.

With a 7-run cushion, this was more than enough run support for Fitts to work with as he allowed just two more runs in the game.

In the complete game win, Fitts allowed just five hits and struck out eight on 93 pitches. He finished with three earned runs.

For the third straight playoff series, Helena was attempting to earn a sweep and avoid the winner-take-all game three scenario on Saturday.

There would be no third game in the quarterfinal round as Green had complete command on the mound across all seven innings for the Huskies.

Green had arguably his best outing of the season against the Toros by allowing just two hits and striking out 10 on just 86 pitches to earn the complete game shutout.

Behind Green, the Helena offense also did its job by scoring runs in all but two innings. Helena got single runs in the third and fourth innings on a fielder’s choice and RBI single to take a 2-0 lead.

In the bottom of the fifth inning, Helena added a run on an error by Spanish Fort and a sacrifice fly to extend the lead to 4-0.

For good measure, Helena’s Josh Daugherty began the bottom of the sixth inning with a leadoff double. Two batters later, Brody Moss would bring him home to score on an RBI single to make it 5-0. Fitts would bat next where he grounded into a double play but still allowed Trevor Bell to score from third bringing the score to 6-0.

Down to their last chance, the Toros needed six runs in the top of the seventh inning but Green was too much for Spanish Fort. Green retired the Toros in order on a ground out, line out and pop out to secure the sweep and send the Huskies to the semifinal round.

With the win, Helena will either play Russell County or Hillcrest-Tuscaloosa in the semifinal round at home the weekend of May 17.

Should Helena get through the semifinal round, there’s a good possibility the Huskies could meet Cullman in a rematch for the 6A state championship on May 17.