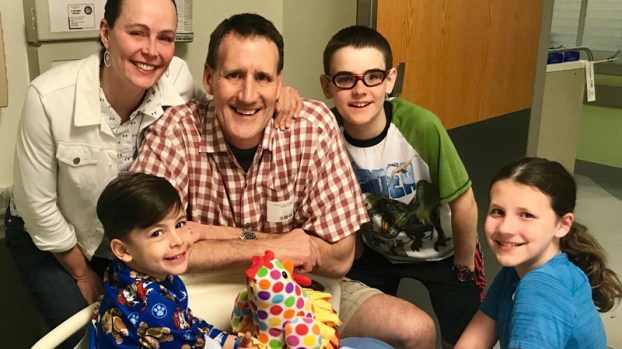 Elizabeth and Keith Jacobsen and their two children visited with 4-year-old Zachary Kohen, left, at the hospital following a near-drowning incident at a hotel pool. (CONTRIBUTED)

HOOVER – An Inverness dermatologist and her husband, a retired Hoover firefighter, saved a four-year-old boy from drowning at a Georgia hotel.

Elizabeth and Keith Jacobsen of Inverness Dermatology and Laser, along with the practice’s officer manager Laurie Thompson, attended a dermatologist manager’s conference in Stone Mountain, Georgia.

Keith Jacobsen serves as the practice administrator and retired as a captain with the Hoover Fire Department.

During some down time, the Jacobsens and their two children were spending some time at the pool.

“As a dermatologist, I am never at a pool, especially at noon,” said Elizabeth Jacobsen, medical director at Inverness Dermatology.

Jacobsen heard screams and realized a young boy had been pulled from the pool.

“He was completely lifeless—blue, no pulse, no breathing,” she said.

With people on the scene, including the boy’s mother, in a state of panic, Jacobsen took charge based on her previous training in CPR.

Jacobsen began chest compressions, and her husband, who has performed multiple resuscitations, arrived at the scene and gave rescue breaths.

Emergency responders then arrived and took Kohen to a nearby hospital, with Thompson following with the boy’s baby sibling.

Jacobsen laughed that she would not necessarily be the most likely candidate in a lifesaving situation.

“On a plane, if someone says, ‘I need a doctor,’ I hide because I’m a dermatologist,” she said but added that the incident highlights the importance of CPR training. “You don’t have to be a doctor. You can learn this; it is not hard.”

In light of the incident, Jacobsen said she plans for Inverness Dermatology to be re-trained in CPR, and she encourages everyone to receive the training, which is offered by the Hoover Fire Department, American Red Cross and other organizations.

The Jacobsen family visited the boy at the hospital later that day.

“It was a true miracle how quickly he recovered,” Jacobsen said. “We’ve been in touch. They’ve sent pictures, and we’re going to get the families together some time.”

Taming the bull: Helena baseball downs Spanish Fort to advance to 6A semifinals